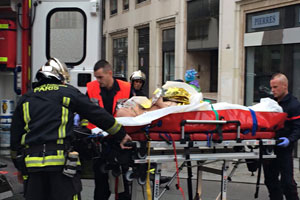 NCRI – Mrs. Maryam Rajavi, President-elect of the Iranian Resistance, strongly condemned the ruthless terrorist attack on the office of a French magazine in Paris and the killing and injuring of a number of its staff and reporters. She offered her condolences to the bereaved families of the victims of this tragedy and to the people and the Government of France.

In this difficult moment, Mrs. Rajavi emphasized, the Iranian people and their Resistance stand with the people of France and the aggrieved families of the victims of this heinous crime.

Mrs. Rajavi added that attacks on innocent civilians, especially journalists, under whatever pretext or excuse, are terrorist crimes and blatantly contradict the teachings of Islam, which in no way condone such atrocities.

Secretariat of the National Council of Resistance of Iran
January 7, 2015