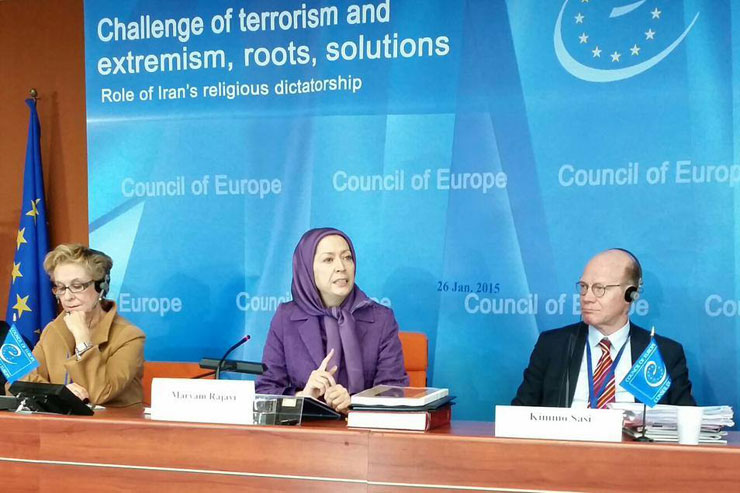 Maryam Rajavi at Council of Europe

Speaking at conference titled “The crisis of terrorism and fundamentalism, roots, solutions, role of religious dictatorship in Iran”:

The massacre of hundreds of thousands in Syria and Iraq will not end with these countries, the flames of this war will spread to the whole region and will also reach the heart of Europe

NCRI – On Monday, January 26, in a conference at Council of Europe titled “The crisis of terrorism and fundamentalism, roots, solutions, role of religious dictatorship in Iran”, Maryam Rajavi, President-elect of the Iranian Resistance, described the eviction of the Iranian regime from Iraq and Syria as the foremost step to win the fight against fundamentalism and underscored on the need to help the Syrian people to overthrow Bashar Assad. She warned: The massacre of hundreds of thousands in Syria and Iraq will not end with these countries and the flames of this war will spread to the whole region and will also reach the heart of Europe.

The conference “The crisis of terrorism and fundamentalism, roots, solutions, role of religious dictatorship in Iran” was held at the invitation of British, Swiss and Finnish parliamentary committees concurrent with the official meeting of the Council of Europe at its headquarters in Strasburg. In this conference, Mrs. Rajavi expressed abhorrence for crimes such as the slaughter of journalists and opening fire on defenseless people in France and stated that the spirit of Islam rejects these actions with utmost repugnance.

In this conference held at the presence of a number of European legislators, including leaders of groups of representatives from various European countries and different political groups, Rajavi emphasized on the need for the eviction of the Iranian regime, the Qods Force and its so-called Shia militias in Iraq. She reminded that without uprooting the Iranian regime and its militias in Iraq, even if the war against ISIS weakens the group in Iraq, it will spread this phenomenon internationally.

In another part of her speech, Rajavi mentioned that the weakness shown by the West in the face of the Iranian regime’s nuclear weapons program, the inclusion of this regime in the international coalition against ISIS, or courting this regime in some way in Iraq and Syria, are all elements that would defeat the strategy of confronting fundamentalism and would give this regime space to operate in and attack from, devastating other countries in the region in fire and bloodshed.

Mrs. Rajavi said that the narrative that Sunni fundamentalism is more dangerous than Shiite fundamentalism and the former should be confronted with the aid of the latter, is a dangerous theory for closing the eyes on the clerical regime’s destructive dominion over the region. This is part of the narrative underpinning a policy with which some American and western politicians have steered the world toward the current disaster. She warned: Acquiescing regime’s meddling in Iraq on the pretext of fighting ISIS is a hundred times more dangerous than the nuclear weapon and a prelude to a greater catastrophe and it is tantamount to avoiding a hole but falling in a well.

President-elect of the Resistance also participated today in official meetings of several political groups, including the Christian Democrats (the largest group in the Council of Europe) and the Liberals, making speeches at the request of the representatives.

Similarly, Rajavi warned about offering concessions to this regime in the nuclear talks and stated that the regime’s nuclear program has no legitimacy for the Iranian people. She thus called on the international community to implement the United Nations resolutions in this regard.

President-elect of the Iranian Resistance accentuated: The ultimate solution in confronting fundamentalism lies in the overthrow of the Iranian regime as the epicenter of fundamentalism and terrorism. With the regime’s downfall, al-Qaeda, ISIS, Hezbollah or Houthis will no longer present a serious threat to peace and democracy and will be deprived of power and influence. In the face of this destructive force with its source in Tehran, instead of appeasing the mullahs, the will of the Iranian people to overthrow the clerical regime must be recognized by the international community.

Secretariat of the National Council of Resistance of Iran
January 26, 2015 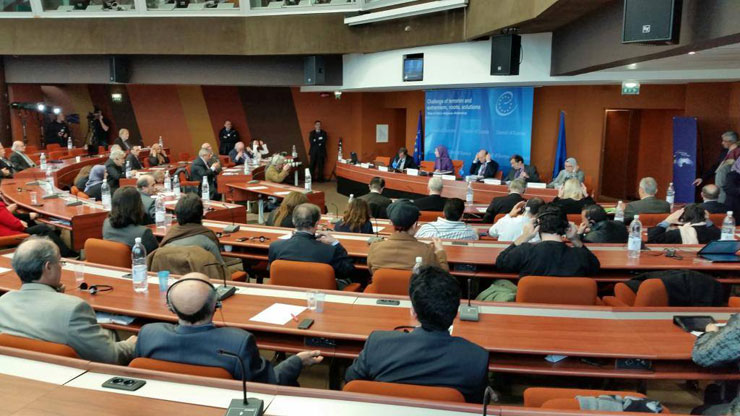