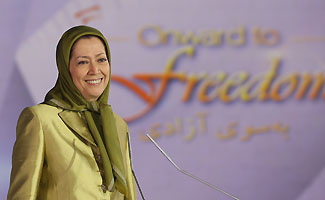 “Talking about a moderate president in the religious fascism ruling Iran, where the power and all key institutions are controlled by the Supreme Leader, is nothing but deception,” Mrs Maryam Rajavi, the president-elect of the Iranian Resistance said on Friday.

Statement of Mrs Maryam Rajavi, the President -elect of the National Council of Resistance of Iran on the occasion of inauguration of Hassan Rouhani, the new President of the mullahs’ regime:

“Talking about a moderate president in the religious fascism ruling Iran, where the power and all key institutions are controlled by the Supreme Leader, is nothing but deception.

This regime is the most serious threat to peace and security for all countries of the region.

This regime has brought nothing but suppression and killing for the Iranian people and terrorism, crisis and warmongering for the region.

The mullahs’ regime is now embarked on obtaining nuclear bomb at any price.

For the past three decades, Rouhani has been an insider and key figure in the regime’s military, security and Intelligence system.

He has acknowledged to have actively participated in the crackdown of the student uprising in the summer of 1999.

As the regime’s lead negotiator on nuclear issue in the past decade, he explicitly pride himself to have duped world community on the regime’s efforts to obtain nuclear bomb.

The Iranian regime will try once again to deceive the international community under the pretext of a new president and buy more time for its dangerous projects such as obtaining nuclear bomb, saving the Syrian dictator and imposing its absolute hegemony in Iraq.

While the regime through Hassan Rouhani pretends to be interested in negotiation with the international community, at the same time it has accelerated its drive to produce nuclear bomb, and dispatching forces and shipping Arms to Syria through Iraq.

Expecting religious dictatorship to become moderate is a mirage that the mullahs’ regime has misled the world community with it for the past 30 years.

As I said on the day that Rouhani was declared the new president of the regime, any move toward moderation will be by judged by the following benchmarks:

Respect for human rights including the freedom of expression; release of all political prisoners, freedom of activity for all political parties, stopping war mongering meddling in Syria and Iraq and abandoning nuclear bomb project.

Without such measures talking of moderation is either illusion or deception.

40 days after the sham election, situation in Iran has become worse with wave of executions across the country, resorting to hanging youth in public and continuing the policy of killing and shedding blood in Iraq and Syria. Mullahs fear any serious reform, because it would rapidly lead to the regime’s downfall.

The people of Iran want regime change in its entirety and establishment of democracy, peace and justice.

They will not miss any opportunity to rise up against the regime.

The people of Iran deserve to enjoy internationally recognized rights of every citizen like all other civilized nations.

This could only be achieved for our pride nations through genuine democracy.

The only solution for the Iranian crisis is to overthrow the entire regime by the people of Iran and the Iranian Resistance.

This is, indeed, the requirement for peace, tranquility and end of war and bloodshed in the region.”