Maryam Rajavi: Religious dictatorship in Iran is the center of sectarian violence in the region 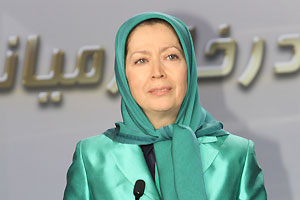 In a conference entitled “Religious dictatorship in Iran epicenter of sectarian wars in the Middle East” held in Paris on Saturday on the occasion of Ramadan, Mrs. Maryam Rajavi, President-elect of the Iranian Resistance, described the rule of Velayat-e faqih in Iran as the source which under the banner of Islam emanates extremism and is the principal element in the calamities and crises imposed on the Islamic World in Iraq, Syria, Palestine, Lebanon and elsewhere in the region.

Rajavi described eviction of the Iranian regime as the practical solution to achieve peace, tolerance and democracy in the region.

She urged the Arab and Muslim countries in the region to sever their political ties with the mullahs’ regime in protest against its export of terrorism and fundamentalism to Syria and Iraq as well as its incitement of sectarian conflict in the Arab world, from Bahrain to Yemen and Lebanon. Eviction of the Iranian regime as the epicenter of extremism and terrorism is the only way to establish peace and democracy in the region.

Read text of speech by Mr. Maryam Rajavi at conference entitled  ” Religious dictatorship in Iran epicenter of sectarian wars in the Middle East” held on Saturday, June 26, 2014 in Paris