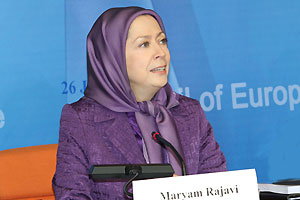 NCRI – Mrs. Maryam Rajavi, President-elect of the Iranian Resistance, in her message to His Holiness Pope Francis, the leader of world Catholics, requested intervention to prevent a blackout of the AMIA terrorist bombing file and a call by His Holiness for the continuation of investigations of this case by the martyred prosecutor Alberto Nisman.

In her message Maryam Rajavi wrote: “We were shocked to hear the shocking news of the murder of the courageous Buenos Aires Judge, Prosecutor Alberto Nisman, who was responsible for investigating the AMIA bombing. He was convinced that this atrocity had been decided, commanded, organized and perpetrated by the leaders of the anti-human regime ruling Iran. Accordingly, he had issued several international arrest warrants against the Iranian regime’s leaders. For this reason, while regrettably not supported by the Government of Argentina, Judge Nisman had received death threats. According to media reports, he had told his daughter that she may lose her father at some point.”

“From the outset, the representatives of the Iranian Resistance obtained significant information on the role of the Iranian regime in the criminal bombing of AMIA and provided that information to an Argentinian Judge at that country’s embassy in Paris. Part of the information was also made public. Now, this honorable judge, who paid the ultimate price for attempting to uncover the truth, is resting in peace in the Kingdom of God”, she added in her message.

Concerned that following this painful tragedy no one may find the courage to discover the truth, Rajavi wrote to the leader of world Catholics: “As such, we can only think of Your Holiness and your intervention to prevent justice and truth from being sacrificed. In 2005, Your Holiness did not tolerate the fact that out of political expediency and commercial interests this dossier was being shelved and, therefore, called for transparent investigations into that horrific crime and last year at the 20th anniversary of this terrible crime you courageously said that: ‘My prayers for all the victims are accompanied today by my call for justice. Justice must be done.’”

The President-elect of the Resistance warned: “Silence vis-à-vis the murder of this valiant judge only emboldens the religious fascism ruling Iran and its affiliated terrorist bands to perpetrate more crimes and assassinations. Over the past 36 years, this regime has executed 120,000 Iranians for defending truth and assassinated dozens of distinguished opposition officials in different countries. It has also secretly or publicly murdered a number of religious leaders, including Christian priests and Sunni clergymen.”

At the end of her message to His Holiness Pope Francis, Rajavi wrote: “Against this backdrop, in the name of truth and peace and in the name of the universal message of Jesus Christ, allow me to humbly implore Your Holiness to intervene and not allow this crime against humanity remain behind a cloak of secrecy and without accountability. Your Holiness intervention would certainly be comforting to the late Judge Nisman, to all innocent victims of AMIA and to those subjected to oppression.”

Secretariat of the National Council of Resistance of Iran
February 2, 2015