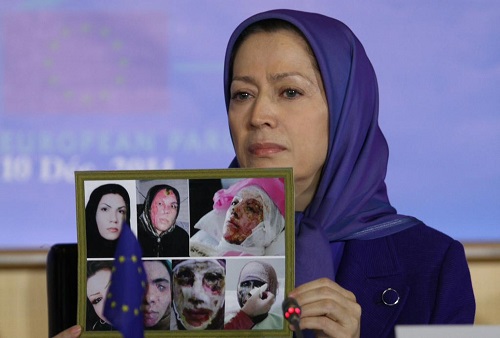 Maryam Rajavi: West must show resolve if it is to stop Iranian regime from obtaining nuclear bomb

She stressed: “This nuclear program enjoys no legitimacy in the eyes of the Iranian people. According to government figures, 12 million Iranian people are suffering from hunger. They do not want this program to continue.”

Rajavi pointed to the increase in atrocities by the fundamentalists in Syria and Iraq, and asked: “Why are Western governments not standing up to a regime that is the ‘Godfather of ISIS’ with a record a hundred times worse than ISIS. How can European governments justify their silence vis-à-vis the regime’s suppression?  More regrettable is the fact that the regime’s lobby has been encouraged to promote collaboration with the Iranian regime as the solution to defeating ISIS. This is not a solution, but a recipe for disaster.”

In the conference held on the internationally recognised Human Rights Day,  Mrs Rajavi referred to the bloody record of the velayat-e faqih regime and the gloomy record of its so-called moderate President Mullah Rouhani with atrocities such as the splashing of acid on defenseless women or the stabbing of female students and said: “The regime of velayat-e faqih lacks any capacity to reform. Since Rouhani became President, at least 1,200 have been executed. In the past 25 years, we have not seen as many executions as in the first year of Rouhani’s presidency. Nor have we seen so many opposition members being massacred or taken hostage. Nor have we seen Iranian women being the target of criminal campaigns to this extent.

Mrs Rajavi condemned the conduct of some Western governments that sacrifice human rights in Iran for their relations with the religious dictatorship and said: “Look at the bitter outcomes of European delegations’ visits to Tehran in the past year. The mullahs used each and every one of them to increase executions.” 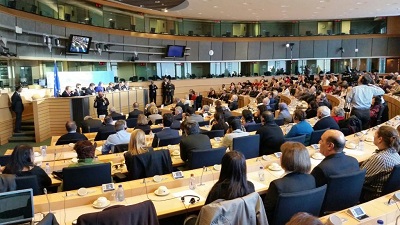 This conference was held with the participation of senior representatives of the European Parliament from various political groups. In another part of her speech Mrs Rajavi said  “Now is the time to intensify the pressure on the regime. The mullahs agreed to negotiate due to mounting pressure.  They stalled on signing the agreement due to West’s concessions. The only way forward is more pressure and more sanctions.

Mrs Rajavi said in another part of her speech: “The regime is entangled in a destructive power struggle at the top, while Iranian society is deeply discontent and on the verge of another uprising.”

Mrs Rajavi expressed her abhorrence for the continuation of the six-year siege against Iranian dissidents in Iraq (Camp Liberty) and urged the EU to ‘change its policy and show resolve in face of the brutal theocracy ruling Iran’.