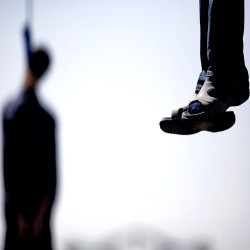 Prisoners have been transferred to death row wards

NCRI – The Iranian Resistance warns about the planned execution of hundreds of prisoners in Qezel Hessar and Gohardasht prisons. Clerical regime is preparing to execute a number of political prisoners as ordinary convicts.

According to credible reports, over 300 prisoners have been condemned to death in mid-September at Qezel Hessar prison. Among them are political prisoners and those arrested during the period of uprisings. One-hundred-twenty of them are prisoners who staged a protest and revolted against the execution of a prisoner on 15 March 2011. All prisoners condemned to death have been transferred to Ward Two of Qezel Hessar prison which is allocated to prisoners on the death row. Protests by prisoners were faced with added pressures from the henchmen.

Concurrently, in the third week of September, 74 prisoners in Gohardasht prison were condemned to death and subsequently transferred to the death row awaiting their execution.

Just in September alone, the clerical regime hanged at least 100 prisoners in Iranian cities. Execution of political prisoners portrayed as drug smugglers or ordinary prisoners is a known method used by the mullahs in the past three decades.

Fearful of escalation in popular uprisings at home and concerned about its faltering regional front as uprisings intensify in Arab countries, the clerical regime is resorting to these barbaric executions to create an atmosphere of terror and prevent the eruption of popular rage against it.

Iterating on the fact that the silence and inaction of the international community emboldens this regime to continue and deepen its crimes, the Iranian Resistance calls on the UN Secretary General, the Security Council, the High Commissioner for Human Rights, other UN bodies, and all defenders of human rights to adopt urgent measures against the medieval regime of mullahs to stop these criminal executions.

Secretariat of the National Council of Resistance of Iran
October 6, 2011