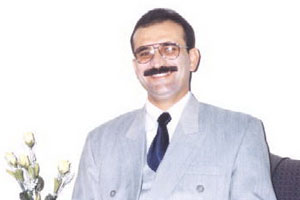 • Let me go to the gallows for supporting the PMOI. We live up to our patriotic and ideological responsibilities and are ready to sacrifice and pay the price whatever it may be

NCRI – Steadfast prisoner Mr. Gholamreza Khosravi was hanged in Gohardasht Prison on Sunday, June 1, after suffering 12 years of torture and imprisonment at the hands of the clerical regime’s henchmen.

During the past few years, these henchmen severely tortured and Gholamreza to break him and force him to give up his support for the People’s Mojahedin Organization of Iran (PMOI/MEK), but he emerged victorious by refusing to give in until the last hours that he was in solitary confinement with his hands and feet in chains.

He said in his interview: “Since I was held in custody again from February 24, 2008, until July 16, 2011, I spent 40 months in solitary confinement in different detention centers without any humanitarian facilities with just twice a year prison visits and no right to make phone calls. The atrocious Alavi (head henchman Reza Seraj, with the pseudonym Alavi, the head interrogator of PMOI) had told my brother that it was he who changed my sentence from three years in prison to the death penalty. The context of the verdict demonstrates the spite and hatred of the regime towards us since the 1980s because they had included issues relating to the 1980s in my sentence. The other reason was my revelations in city of Rafsanjan’s unjust court against the Intelligence Ministry’s barbaric and inhumane acts and my refusal to cooperate in giving information on the PMOI or to speak out against them on television.

“I was involved with Simaye Azadi (Iran National Television INTV) in disclosing the criminal, warmongering and anti-patriotic nature of the regime and the spread of poverty, corruption and destruction by them. I sent them information regarding this and made a monetary contribution to this TV network.”

Speaking about his background, Gholamreza said: “Since 1979, as the anti-monarchic revolution gathered speed, I got acquainted with the PMOI. After the victory of the revolution, this acquaintance became a steady relationship and I was active in the student section of the organization. I was finally arrested in August of 1981 for this reason. I was active in the cities of Abadan, Nourabad Mamasani and Kazeroun. In August 1981, while I was 16, I was arrested for my active support of the PMOI. I spent four years in the revolutionary guards’ prison in Kazeroun and another year in exile in the Adelabad Prison of Shiraz. This period was full of torment, torture and much hardship. I was released in August 1986. After I was released from prison, although I passed the entrance test to university, they deprived me of continuing my studies and preconditioned my admission to university on accepting intelligence cooperation with the Intelligence Ministry, which I never accepted.”
Speaking on his political position he had stated: “I have no fear or horror in declaring my support for the PMOI. Let me be sent to the gallows for this support and the anti-human spite and hatred of this regime for this organization and its supporters. Let me be the flag of honor and liberation for the heroic people of Iran and let our martyrdom result in defaming this anti-human regime and cause its quicker downfall.”

Speaking on the condition of the unjust court that had tried him he stipulated: “This bloodthirsty regime refused to allow me to even speak for one minute with my lawyers before the trial. The intelligence and the security elements and the staff of the court branch office were keen on preventing me from speaking or establishing any contact with my lawyers. There was a lawyer [in the trial], but there was no jury. Moreover, the verdicts are predetermined and are handed down to the judges.”

Commenting on Rouhani’s promises to review cases and release political prisoners, Gholamreza said: “In my view, if Hassan Rouhani had made any such promises it is only a deceitful remark for the propaganda purposes. It is only aimed to deceive people in Iran and in the world to reduce pressure by public opinion inside and outside the country in order to prevent further international condemnations and subsequent sanctions. From the regime’s point of view, prisoners of conscience and political prisoners are terms used for people affiliated to factions within the regime and not others. They are the same criminals from decades ago who have repeatedly declared in interrogations and trials that they regretted change of situation, otherwise they would not have spared a minute to kill us. If there is any change it is only due to pressures and the faltering state of the regime and aimed to save the regime. ”

“The other point that I want to make is that … I am fully ready to die for people and the liberation ideals of the People’s Mojahedin Organization of Iran. I consider my death sentence as the God’s will and whatever happens is for the good and I accept it wholeheartedly and I am honored by it. I do not at all look for or hope for what Hassan Rouhani may do or what kind of slogans he may use. We are doing our nationalistic and patriotic duties for our ideals and we are absolutely ready to be sacrificed and pay the price on every level. Who the hell is Rouhani? Our view of the world extends far beyond these things. I call on everyone to get ready and prepare for the overthrow of the criminal and anti-human regime and make every effort to get rid of this regime with all its factions and then establish a popular rule, freedom, democracy, equality and justice for everyone in the country.”

Secretariat of the National Council of Resistance of Iran
June 1, 2014

Previous articleMaryam Rajavi: Executions in Iran and Ashraf, futile attempts to save a crumbling regime
Next articleStatus of Six Christians Detained in Tehran Uncertain