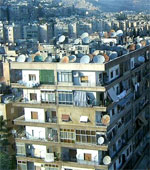 NCRI – In a move to suppress the people’s overwhelming response to the banned satellite channel Simaye-Azadi, the mullahs’ regime has begun a campaign of rounding up satellite dishes from houses in Iran. The campaign was reported in the government-run daily Hambastegi on August 19.

Rounding up satellite dishes from people’s houses increased dramatically on Monday, Tuesday, and Wednesday of last week. "The State Security Forces’ anti-riot units entered residential blocks and went to the rooftops. They destroyed the dishes and took them away," it reported.

The commander of the SSF, Brig. Gen. Esmaeil Ahmadi-Moqaddam, told the government-run news agency ISNA, "Those people who use satellite dishes freely should be dealt with firmly, according to the spirit of the law. … Some think that they can use dishes openly and freely. That is the reason they put them on their rooftops or porches."

As well as confiscating satellite dishes, the regime is attempting to stop people from having access to free information by installing jamming devices in various parts of the country including Tehran. The actions are also meant to prevent people from having access to Simaye-Azadi, thus putting on display the regime’s weakness in suppressing people’s increasing uprisings and demonstrations.

Secretariat of the National Council of Resistance of Iran
August 20, 2006