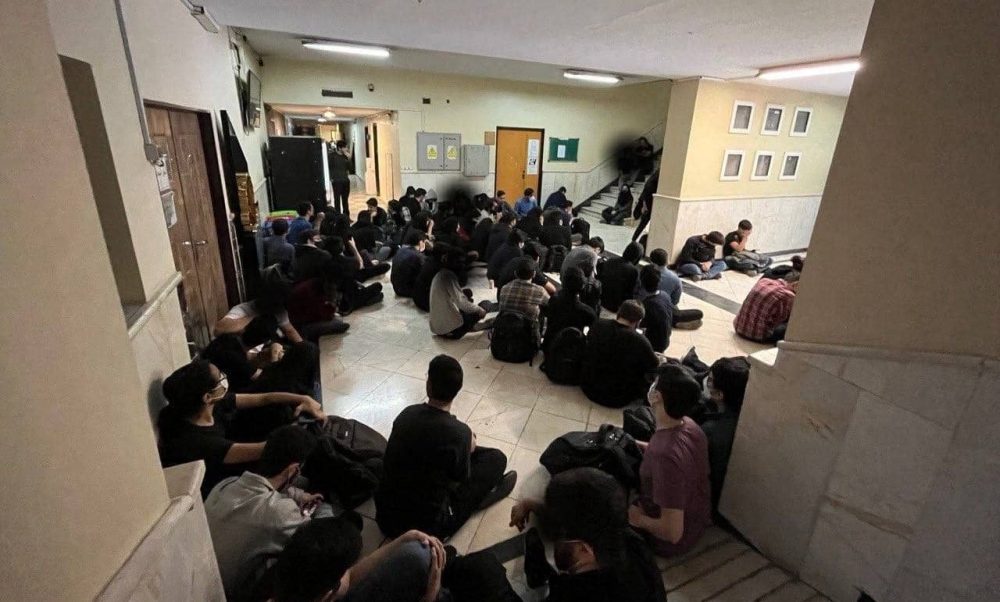 On Saturday, October 28, on the 44th day of the nationwide uprising, a large number of people in Arak, Markazi Province, took part in the burial ceremony of Mehrshad Shahidi, who was killed in the protests.

The people chanted, “Death to the IRGC,” referring to the suppressive forces of the Islamic Revolutionary Guard Corps, “I will kill whoever killed my brother,” “Death to the Supreme Leader after many long years of crimes,” and “Each person is killed, a thousand people will rise.” They clashed with repressive forces who fired tear gas at the crowd.

A large rally with the slogan “Death to Khamenei” was held in Mahabad, where the IRGC forces fired at the protesters.

The people of Sanandaj gathered outside Kosar Hospital, where Ashkan Morovatti was hospitalized. He was wounded due to shots by State Security Force (SSF) agents yesterday.

Demonstrations and clashes with the regime’s agents took place in the Aliabad district of Ardabil, northwest Iran.

In Ilam, rebellious youths threw Molotov Cocktails at a base of repressive Basij forces.

Suppressive forces opened fire on Kurdistan University of Medical Sciences students in Sanandaj. Several students were wounded, and one is in serious condition.

The students of the Technical Faculty of Tehran University chanted, “Daesh is IRGC; these plans are repetitive!”, “The one who is crippled (i.e., Khamenei) is the murderer of Shahcheragh (the shrine where several people were shot down a few days ago),” and “Shahcharagh is another Rex (Cinema Rex where hundreds of people were burnt during 1979 revolution), this is another trick”. Amir Kabir University students chanted, “The Leader (Khamenei) lives in our blood.”

Medical students of Kurdistan chanted, “It’s time for the revolution; it’s another November (referring to November 2019 uprising).” In Ahvaz, the students of Jundi Shapur and Chamran universities joined together and chanted, “Freedom, freedom, freedom.” The students of Tehran Azad University – Sohank branch protested and chanted, “Death to the Dictator,” and “My martyred sister, we shall continue your path.” In Karaj, Technical Faculty students painted their hands and pieces of cloth in red as blood and rallied outside the faculty. Suppressive forces arrested several students last night and today.

Today, high school students protested in Kermanshah and Kamiyaran in Kermanshah province. In Kamiyaran, they chanted, “Basiji, Daesh, congratulations on your wedding.”

In fear of turning the celebration of Cyrus the Great Day on October 29 into public demonstrations, the regime closed Pasargad, where Cyrus’s tomb is located, from October 27 to 29.

Hossain Salami, commander-in-chief of the IRGC, spoke today at the ceremony of those killed in Shiraz’s Shahcheragh. While he could not hide his desperation for the continuation of the uprising, he described the protesters as “a few deceived youths” and threatened them. He said, “we tell the youth and those who were deceived that today is the last day of riots and that they should not come to the streets again; What do you demand from this nation?… Do you want to come to power by the MEK? We will bury the wishes of our enemies in this land.” His stupid threats only make the people of Iran more determined to overthrow the regime.

October 29 – Mashhad, northeast #Iran
Authorities have launched an attack on the Islamic Azad University of Mashhad similar to that of Sharif University, hitting and confining the students, according to activists.#IranRevolution2022#آزادی_آزادی_آزادیpic.twitter.com/oEv8lO9syy

October 29 – Karaj, west of Tehran, #Iran
Students of Kharazmi University chanting:
"So many years of crimes! Death to the mullahs' regime!"#IranRevolution2022 #آزادی_آزادی_آزادیpic.twitter.com/Drc8Nz9qaX

Previous article
Iran: Projection of Image of the Resistance Leader and Dr. Mossadegh in Shiraz
Next article
Iran News in Brief – October 30, 2022