Clashes Between People and IRGC, Strikes and Protests Across Iran 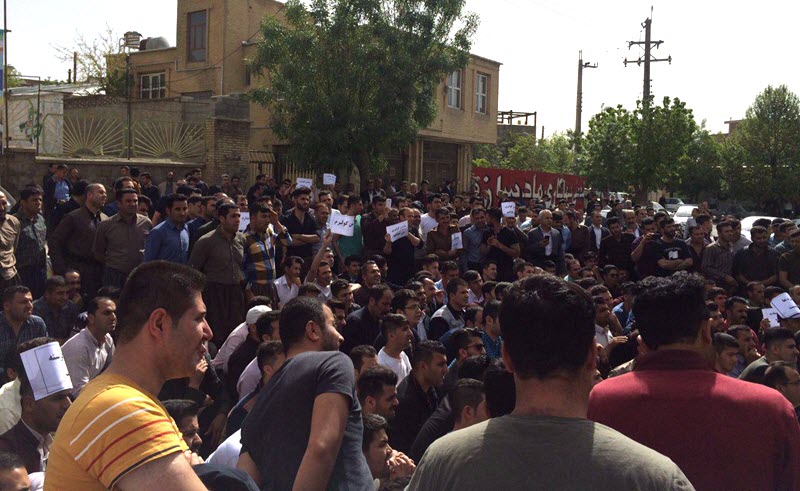 On Tuesday night, April 24, the people of Marivan in the Kurdistan province clashed with the criminal Revolutionary Guards (IRGC). The clash took place when Pasdar-Colonel (IRGC colonel) Kaveh Kohneh-Poushi along with another Pasdar, Latif Nikpay, murdered an inhabitant from one of the villages of Marivan. The people burnt down the houses of the two criminals in protest of this crime.

The anti-riot unit started attacking and beating these people in support of the two criminals. The clashes, which lasted for hours, continued up to the Bu’ali Hospital in Marivan. Padar-Colonel Kaveh Kohneh-Poushi is a criminal with a notorious background working for the repressive organs in Marivan. He is extremely hatred by the people of the area.

In Baneh and Javanrood, the strike of the merchants and shopkeepers continued for the eleventh day. The intelligence agents arrested a protesting woman who was calling on people in the Baneh main street to continue the strike, and transferred her to a police station. The people of Baneh, having gathered outside the police station, forced the mercenaries to release her. No information is available on the fate of six other Baneh inhabitants detained last week.

The poor farmers in the east of Isfahan continued their protests by staging a sit-in in front of the governorate building. The governor met with them at the sit-in, but he had no answer to the problem of the farmers.

A day earlier, a number of farmers in Ardestan (Isfahan province) staged a gathering in protest at the drilling of water wells by the local authorities. They warned of the consequences of continuing drilling which would dry up the qanat in the area.

Farmers from the cities of Weiss and Mollasani (Khuzestan Province) gathered outside the governor’s office for the third straight day to protest against lack of their right to water.

The workers of Hamidieh Municipality gathered in front of the city’s municipality for the third day in protest against the failure to pay their salaries for months and the hollow promises of the regime’s authorities.

A large number of oil industry staff gathered in front of the main building of the oil ministry in Tehran. They object to the failure to implement the promises by the regime aimed at deceiving them. The repressive forces sought to disperse them by collecting their banners.

In Yazd, fuel-supplying truck drivers went on strike in protest of lower fares.

A number of environmental activists in Tabriz gathered on the path of Rouhani to protest the performance of Rouhani’s government in relation to Lake Urmia.

Secretariat of the National Council of Resistance of Iran
April 25, 2018

Previous articleMike Pompeo Confirmed as the New Secretary of State
Next articleWhat Lies Ahead for the Iranian Regime and the Nuclear Deal?