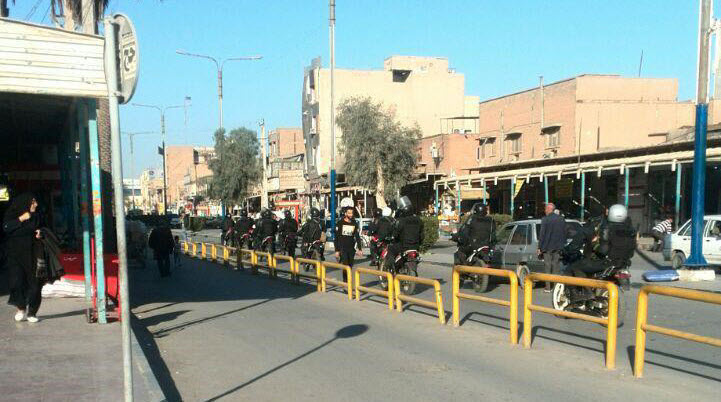 On Thursday February 1, in spite of the presence of suppressive forces who were on alert, and despite the cold weather, people in different cities of the country like Sanandaj, Ahvaz, Kermanshah, Isfahan, Zarrin Shahr, Shahrood, Hamedan, Tuyserkan, Mashhad, Dorood, Arak, Maragheh, Yazd, Rasht and Tehran, rallied while chanting “ Death to the Dictator” and clashed with IRGC forces.

At the Vali Asr intersection in Tehran, the police force attacked the people at sunset. The brave youths continued their gathering, rallies, chanting slogans and clashed with regime’s mercenaries. Another group of people moved from the Abu Rayhan Ave. toward Valiasr Square while chanting slogans.

In the Vanak Square of Tehran, following the parade of the IRGC and the Basiji motorcyclist, young motorcyclists in a harmonious movement encouraged the people by chanting patriotic slogans and honking horns. The repressive forces were stationed in Amir Abad and Enqelab Square and the Northern Kargar Ave. In the Azadi Square, the regime has stationed a water-cannon truck.

In Rasht, hundreds of people chanting “Death to the Dictator”, “Khamenei, Shame on you, let go of the state” expressed their disgust against the Velayat-e faqih regime. The repressive forces responded by firing tear gas.

In Sanandaj, the people chanted “Death to the Dictator” in the Enqelab, Khomeini and Azadi squares. The people clashed with the riot forces and set ablaze to a trailer and a motorcycle belonging to repressive forces. By slowing down the Internet, the regime prevents the people from sending information. Angry people set ablaze a Bassij base. The repressive forces have taken a water-cannon truck to disperse the people.

In Tuyserkan, the people’s gathering led to clashes with the repressive forces in Bahonar Ave. The regime’s mercenaries fired into the air to disperse people.

The people of Doroud participated in the 40th day ceremony of Hamzeh Lashni Zand martyrdom. The mercenaries were patrolling across the city in fear of the people anger.

In Isfahan, a group of people chanted “Death to the Dictator” and “Death to Khamenei” near Khaju Bridge which was attacked by the police.

In the Zarrin-Shahr of Isfahan, people gathered at the Grand Mosque intersection in spite of the cold weather and severe repression. They chanted: “Death to Khomeini, Khamenei and Khatami, the three mercenaries.”

In Malek Abad Ave. of Mashhad, addressing repressive forces the people chanted “Be afraid, we are all together”, and “Vigilant Mashhadi, rise up”.

Secretariat of the National Council of Resistance of Iran
February 1, 2018