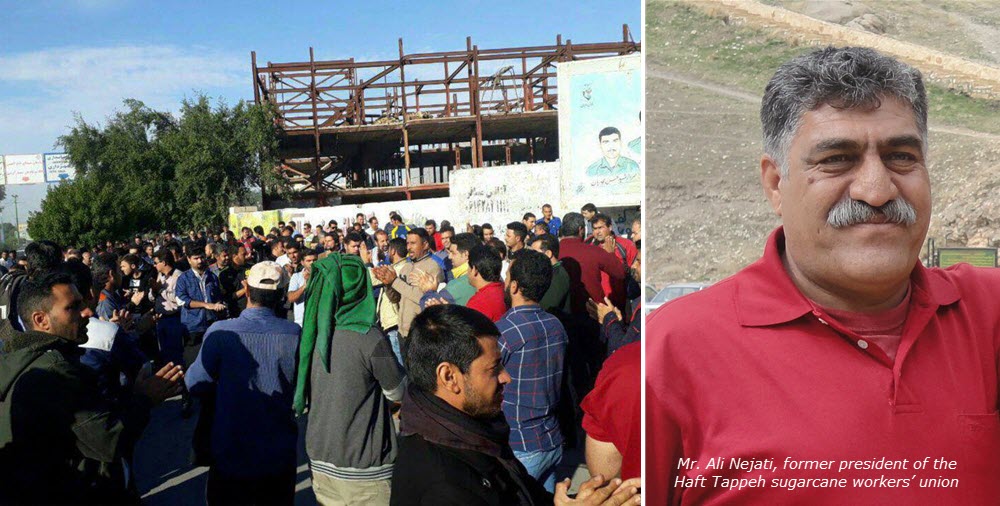 The Iranian regime, furious and aggravated by the strike and demonstrations of courageous workers of the Haft Tappeh sugar cane mill, on Thursday November 29 arrested Mr. Ali Nejati, former president of the Haft Tappeh sugarcane workers’ union, along with his son, and transferred them to an unknown location. The repressive forces arrested and beat him while he was suffering from heart disease and was badly ill.

Despite these arrests and the presence of suppressive forces in the city of Shush, the brave workers of Haft Tappeh sugar cane mill continued their protest for the 25th day. They chanted in the gathering in front of the regime’s governorate: Imprisoned worker must be freed.

On the other hand, the governor, the regime’s MP and the head of the Revolutionary Guards went to the area to force the workers to end the strike by giving deceptive promises. But they were faced with a negative response from the workers. Workers interrupted the speech of the member of the regime’s parliament by chanting slogans.

The Iranian Resistance calls on the UN High Commissioner for Human Rights, the International Labor Organization, trade unions and labor unions all over the world to take urgent action to free Ali Nejati and other detained workers and to support striking workers.

Secretariat of the National Council of Resistance of Iran
November 29, 2018

Previous articleIran: Regime’s Ban of Telegram Is a Failure
Next articleEviction of Iran Regime From Syria and Iraq Is Vital for the Whole Region