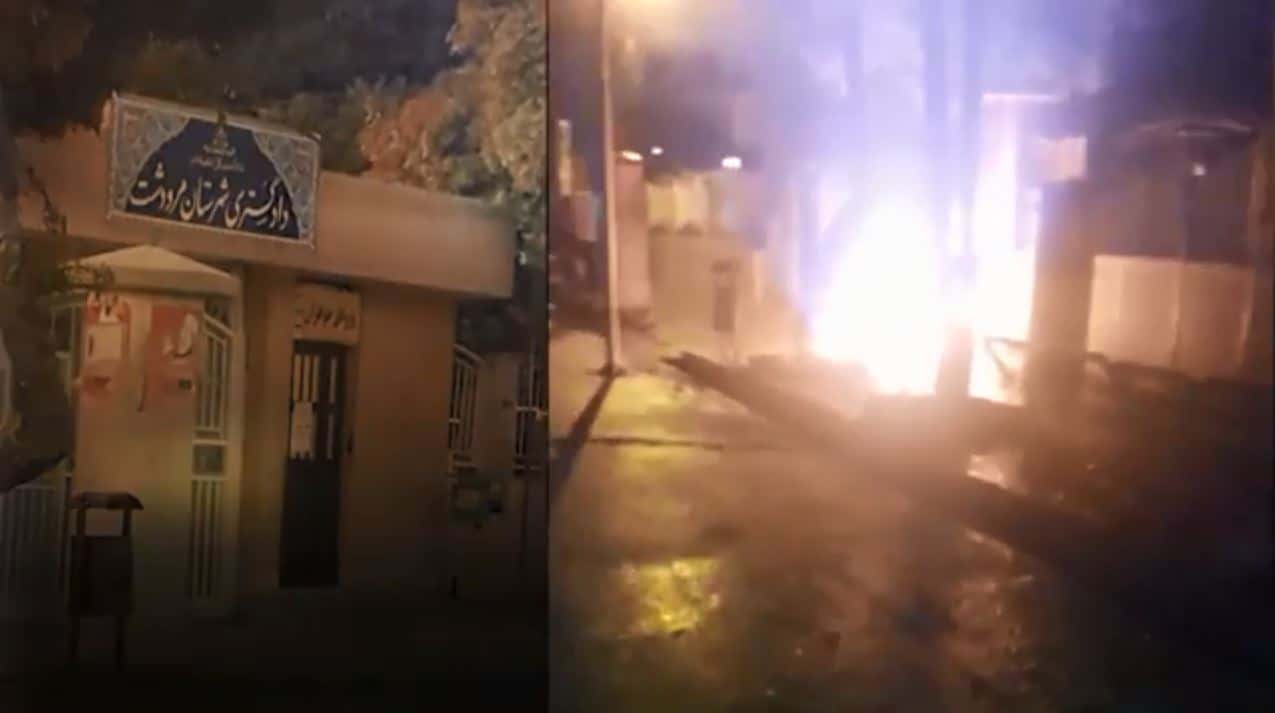 In the early hours of Saturday, November 14, on the anniversary of the November 2019 uprisings, in a series of bold actions, defiant youth targeted the Islamic Revolutionary Guard Corps (IRGC) and other centers of suppression in Tehran, Marvdasht in Shiraz, Kish, Sabzevar, and Izeh.

The activities took place while the regime’s State Security Forces (SSF) and other security organs were on high alert.

The entrance to the IRGC’s paramilitary Bassij, so-called Thamen al-A’ameh (Mehran), and symbols of the notorious Ministry of Intelligence and Security (MOIS) and the IRGC were torched in the capital Tehran.

Defiant youth targeted the regime’s judiciary in Marvdasht in Shiraz and torched its entrance. The judiciary branch has issued death sentences and long prison terms for young people and protesters.

In Sabzevar, defiant youth set fire to posters of the regime’s former and current supreme leaders Khomeini and Khamenei, while in Izeh, they destroyed a poster of the eliminated terrorist mastermind Qassem Soleimani.

Today, the Security and Counterterrorism Committee of the National Council of Resistance of Iran (NCRI) released an audio file revealing a portion of communications among commanders of the suppressive SSF, who panicked in fear after the attacks by defiant youth. They issued numerous orders to SSF units and agents to swiftly react to the attacks and get to the scene as quickly as possible. During one of these communications, an SSF agent says: “In view of the fact that currently an incident has been reported at the Heravi square area [in Tehran] … they have checked it and are saying that the report is true. This means that everyone has to be vigilant and keep the patrol units active. Last night, too, in our area there was an incident against the Bassij base. God willing it won’t be repeated tonight. Patrol units have to be active and show the necessary vigilance in this regard. … God willing, it should not happen in our area. If incidents take place, they will definitely disrupt our shift, so be vigilant.”

Secretariat of the National Council of Resistance of Iran (NCRI)
November 15, 2020

Call on the UN to take urgent action to secure the release of prisoners, especially political prisoners until the end of the Pandemic At least...
Read more
Statements

Alireza Zali, head of the Coronavirus Combat Taskforce (NCCT) in Tehran: People think that with imposed restrictions, mortality will decrease rapidly. This is...
Read more
Statements

Iran: Call for Immediate International Action To Secure the Release of Ahmad Reza Jalali and To Prevent His Execution

The Iranian Resistance urges the Secretary-General of the United Nations, the UN High Commissioner for human rights, and the UN Human Rights Council, as...
Read more