Iran: Demonstration of Thousands of Farmers Chanting: “We Fight, We Die, We Get Back Our Water Share” 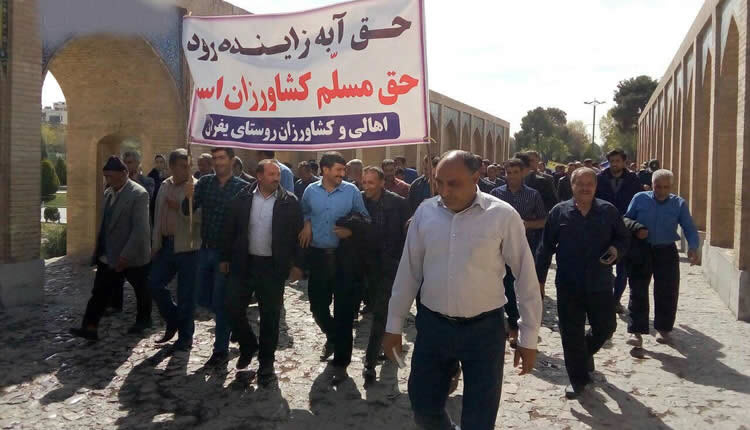 The protests of thousands of desperate farmers from cities of Varzaneh, Sarshiadoran, Ejiyeh … With the support of the people of Isfahan became more widespread on Friday.

A massive crowd gathered along the Khaju Bridge in protest to the regime’s refusal to grant farmers the right to water and catastrophic livelihoods of farmers and ranchers. They went on to march on the streets of the city with the slogans of: “Today is the day of mourning, the life of the worker is in peril today; Liar Rouhani, where is our Zayandeh Rood? Authorities! Be ashamed, leave your presidency.” They also chanted: Farmer dies, does not accept charity; we fight, we die, we get our water share back. They had a great banner reading: “We, the farmers of the Eastern Isfahan, want our thousands years old water share and we stand with our lives for it.”

Protesters attended the Friday’s prayer show in the city during their march. In response to the nonsense talks of the speaker of the Friday prayers, they turned their back to him and heckled him, chanting, “First clear our situation then the Friday prayers can begin,” and interrupted his speech. Demonstrators were chanting at the time of their gathering in front of the regime’s radio and television: “Our disgrace is our TV and Radio”.

The protests of Varzaneh farmers began on February 16, and since February 28, they have been rallying in front of the Isfahan governorate, which spread with the support of people of Isfahan and farmers in the eastern regions of Isfahan.

Secretariat of the National Council of Resistance of Iran
March 16, 2018