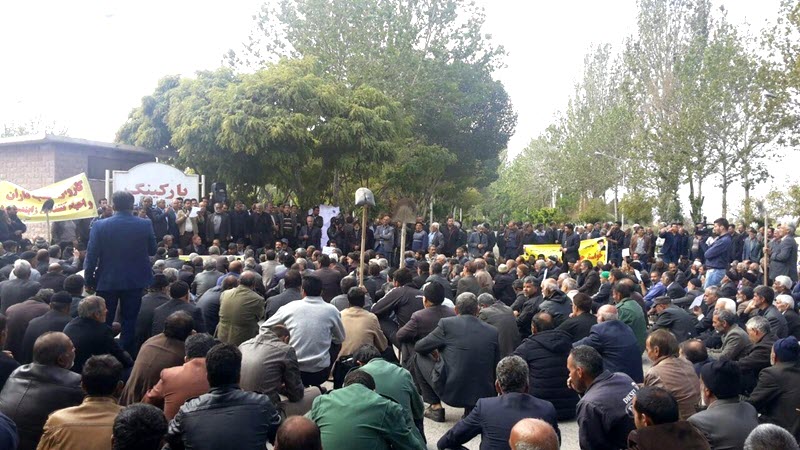 Demonstrations and sit-in of poor farmers of the cities and villages of East and West of Isfahan are continuing for the third month in protest to the deprivation of their water rights and the destruction of agriculture, which is the direct consequence of the plundering of the mullahs regime. Striking farmers, despite the cold weather, have staged sit-ins by parking tractors and agricultural machinery, and camping in the streets and intersections of cities and villages.

On November 25, farmers in the village of Qarnah, in the suburb of the city of Ziar, tried to prevent the transfer of water from their area to other areas by destroying some of the pipes. Subsequently, Special Guard mercenaries attacked farmers and injured a number of them by tear gas. Farmers chanted: Zayandeh Rood water is our absolute right; we die, we do not accept humiliation; the farmer is awake, he hates (empty) promise. On the same day, state security forces attacked the mosque in Qarnah, where farmers had staged their sit-in, and broke its glasses.

The strikers wrote on their banners: We want our water rights; Do not split our Zayandeh Rood; Is there any helper? Death with dignity is better than life with humiliation; Until when false promises?

The destruction of agriculture in the province of Isfahan and the role of the anti-people policies of the regime in this disaster are such that the officials of the regime inevitably acknowledge some portions of it. Hasan Kamran, a member of the regime’s parliament from Isfahan, said that the Ministry of Energy has provided 1,592 million cubic meters of water to Isfahan Steel, Iron and Steel and military industries, acknowledging that the industry is using the water and the people are using waste water. “The law of water right goes back to 1964, and the Ministry of Energy had no legal right to change it and sell the water.” Referring to an increase of 55 million cubic meters of Zayandeh Rood reserves, he said, “Water right cannot be used for drinking and industry”. (State media – October 21, 2018).

He had said earlier: “For a decade, water right of the farmers of Isfahan has been plundered… We have lied to them for 10 years… On the one hand, the bank brings an arrest warrant because he (the farmer) was unable to pay his debt. On the other hand, we give his wheat money late, we don’t give him compensation, we steal his water right; who is stealing from him? the same Ministry of Energy” (Radio Farhang – April 10, 2018).

Nasser Mousavi Largani, another member of the regime’s parliament, said: “The farmers of Ghahderijan – their land has turned into desert. They do not have bread to eat. Likewise, the farmers of Pirbakon “

Ali Bakhtiar, another member of the regime’s parliament, said that 50-60 thousand heads of dairy cattle have now reached 30 thousand or less. Livestock is really disappearing … 70-80% of poultry farms in the region are not used (Parliament News Agency – November 16).

The Iranian resistance salutes the farmers of Isfahan and emphasizes that as long as the corrupt and criminal regime of Velayat-e faqih is in power, the farmers, the workers and the working people have nothing but unemployment, poverty and hunger, and calls on all fellow citizens, especially the brave youth of the province, to express solidarity with the farmers and to support their just demands.

Secretariat of the National Council of Resistance of Iran
November 28, 2018