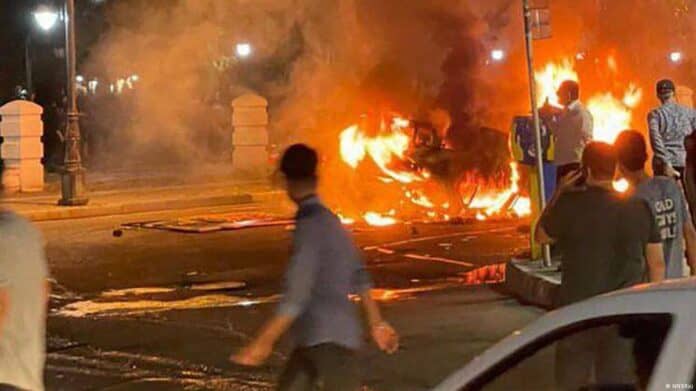 On Monday, December 9, the 116th day of the uprising, various parts of Tehran, including Ekbatan, Lavizan, Aqdasiyeh, Tehran Villa, Tehran Pars, Ziba Shahr, and Darband were the scenes of nightly demonstrations and chants of “Death to Khamenei the murderer,” “Death to the dictator,” “Khamenei is a murderer, his rule is null and void,” “Death to the murderous regime,” “Death to IRGC” echoed from the buildings and rooftops.

In Isfahan and Gohardasht of Karaj, people also chanted “Poverty, corruption, high prices, onward to overthrow” and “The homeland will not be free as long as mullahs not deposed.”

The defiant youths in Jam of Bushehr targeted a Basij base using Molotov cocktails and set fire to Qassem Soleimani’s picture on a billboard displayed in a major square in Zanjan, and another similar banner outside the IRGC base in Kerman.

On Monday in Eshtehard (Alborz province), people went to the “Behesht Ali” cemetery to participate in the ceremony on the third day of the martyrdom of Mohammad Mehdi Karmi and Mohammad Hosseini, but the suppressive agents prevented them from entering the cemetery by beating them and breaking the windows of their cars. People reacted by closing the street and chanting “Death to Khamenei” and “Khamenei is a murderer, his rule is null and void.”

The 40th-day martyrdom ceremony of Avat Qaderpour and Ebrahim Sharifi was held in Bukan by their relatives and local residents chanting anti-government slogans.

A massive gathering of an angry crowd outside Gohardasht prison in Karaj in protest against the death sentences of two prisoners, Mohammad Qobadlou and Mohammad Boroughani, took shape in the early hours of Monday, January 9, and continued for several hours. The suppressive forces attacked the gathering, but the people resisted by chanting “For every fallen person, one thousand will rise,” “I will kill whoever killed my brother,” “This year, is a year of sacrifice, Seyyed Ali (Khamenei) will be overthrown” and “This is the last warning; There will a revolt if you carry on with the execution.”

In the meantime, the regime’s Judiciary issued death sentences for Majid Kazemi, Saeed Yaqoubi, and Saleh Mirhashmi in Isfahan and Ebrahim Naroi in Zahedan. They are among those arrested during the nationwide uprising.