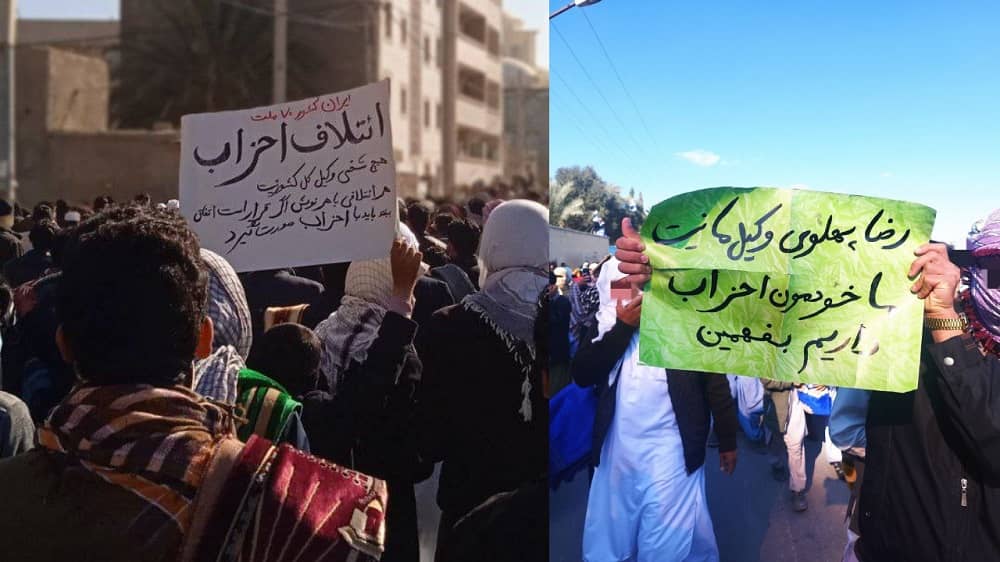 On Friday, January 20th, the 127th day of the nationwide uprising, thousands of Zahedan residents, once again staged mass demonstrations after Friday prayers despite severe repressive measures. Protesters were chanting “Death to Khamenei,” “Khamenei is a murderer, his rule is null and void,” “Shame on Khamenei, let go of the country,” “No to monarchy, no to clerical rule, we want democracy and equality,” “Mullahs must get lost,” “This year, is a year of sacrifice, Seyyed Ali (Khamenei) will be overthrown,” “Death to Basij, death to IRGC” and “Basi and IRGC are the same as ISIS,” “I will kill whoever killed my brother.”

The IRGC, which is in control of Zahedan and its Governor who is a member of the IRGC, had stationed a large number of suppressive forces in the city and set up at least 15 new checkpoints to prevent demonstrations. On some of the placards carried by the demonstrators were written, “We will avenge our martyrs.”

In the city of Khash, people staged demonstrations in the streets after Friday prayers and chanted “Death to Khamenei” and “Death to Basiji.”

The people of Rask also held demonstrations chanting “Death to Khamenei,” “Death to the dictator” and “Shame on Khamenei, let go of the country.”

In Galikesh city in Golestan province, hundreds of Sunnis protested against the house arrest of the city’s Friday prayers leader, Molavi Mohammad Hossein Gorgich, and gathered outside his residence. A group of protesters has been sitting outside his home in the past few days, despite the sub-zero cold weather and the regime’s suppressive measures, to prevent his arrest. In his Friday prayer sermon two weeks ago, he criticized the suppression, killing, and execution of demonstrators.

Last night, the residents of Bandar Abbas staged nightly protests and chanted “This year, is a year of sacrifice, Seyyed Ali (Khamenei) will be overthrown.” The people of Mahabad and Saqqez celebrated the adoption of a resolution by the European Parliament regarding the terrorist designation of the IRGC by going on the streets and setting off fireworks.

Mansour Hormozi, who was injured during the brutal attack and killing of Zahedan demonstrators on September 30, finally died on January 16.

January 20 – Galikesh, northeast #Iran
More footage of protesters taking to the streets on this 127th day of the nationwide uprising.#IranRevolution2023#مرگ_بر_ستمگر_چه_شاه_باشه_چه_رهبر pic.twitter.com/xbOG5c7QhA

January 20 – Zahedan, southeast #Iran
Additional footage of the large number of locals continuing the nationwide protests against the regime on the 127th day of the uprising.#IranRevolution2023#مرگ_بر_ستمگر_چه_شاه_باشه_چه_رهبرpic.twitter.com/FsS3S43XcE