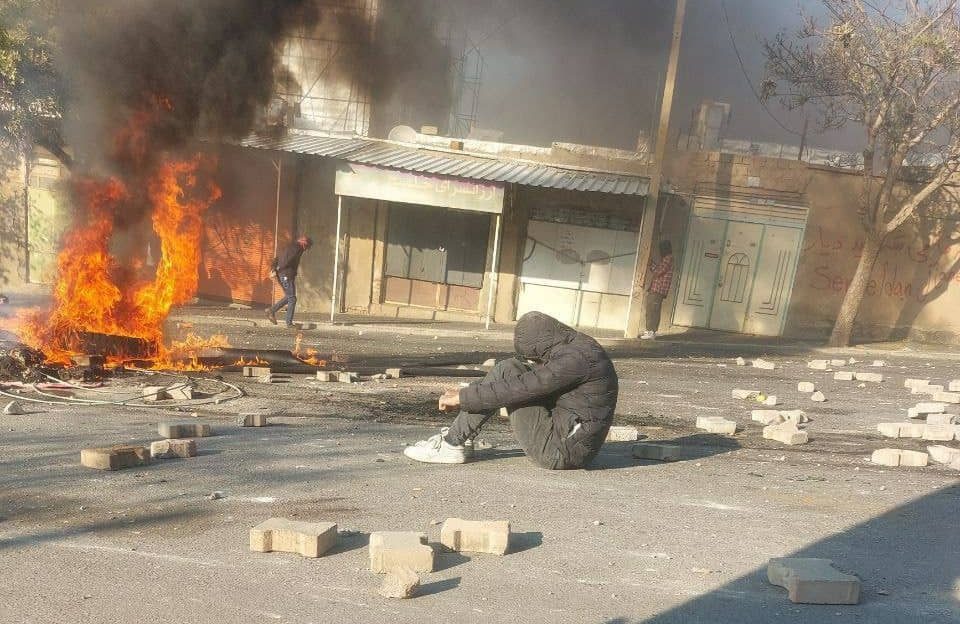 On Saturday, November 19, the 65th day of the nationwide uprising, in “Ziba-Shahr” of Tehran, a large crowd paid their homage to the body of Hamid-Reza Rouhi by chanting, “This perished blossom is a gift to our nation” and “Hamid, Hadith, Siavash, fire will be returned with fire” and “We swear on the blood of those fallen that we will continue this path to the end”. They buried Hamid-Reza in Behesht Zahra cemetery.

Also, the funeral ceremony of martyr Kamal Ahmadpour was held in Mahabad, which was attended by a vast number of locals chanting, “Azeri, Baloch, and Kurds; Freedom and Equality”. Kamal Ahmadpour, a father of two, was murdered by three bullets shot by IRGC agents during the protest in Mahabad yesterday. Following the ceremony, the people of Mahabad staged their protest in the streets and chanted, “Death to the dictator” and ” This year is the year of sacrifice; Seyed Ali (Khamenei) will be overthrown”. Youths in Mahabad blocked roads and barricaded streets and broadcast revolutionary anthems.

Locals in Diwandarreh staged a protest rally this morning and clashed with the regime’s suppressive agents. Security guards fired at the people where several youths were martyred or wounded.

In Kashan, Shiraz, a large crowd paid homage to Sajjad Ghaemi by chanting slogans such as “Qashqai dies but never accepts humiliation”. The regime’s criminal agents brutally attacked the people and shot at them killing and wounding many.

In Tehran, students at various universities such as Sharif, Allameh, Tarbiat Modares, Shahr Quds Azad, Faculty of Social Sciences of Tehran, and Faculty of Industry of Amir Kabir staged their protest chanting, “Imprisoned students should be released,” and ” This year is the year of sacrifice; Seyed Ali (Khamenei) shall be overthrown”. The students of medical science, Art and Azad of Tabriz went on strike. They chanted slogans like “We are all Aylar. Fight, we shall fight back,” “I will kill whoever killed my sister,” and “Basij, IRGC, you are our ISIS”. Students at the Isfahan University of Technology, Najaf Abad Technical School, Gilan University Central Campus, Shiraz University, Sanandaj University of Medical Sciences, etc., staged their protests and sit-ins. They chanted slogans such as, ” We swear on the blood of those fallen that we will continue this path to the end!”, “Death to the child-killing government”, and ” We haven’t sacrificed our dearest ones to appease the murderous [Khamenei].”

In Zahedan, people protested by setting up fires in the streets. Families of the arrested students gathered outside the security guard post of Kermanshah’s Razi University and chanted, “Where are our children?”  Youths in Hormozgan’s Hanguyeh district set fire to a paramilitary Basij base. Students protested in Bandar Abbas by chanting, “we are all Aylars, Fight, we shall fight back “.

Concerning Ali Khamenei’s today remarks, Mrs. Maryam Rajavi, the President-elect of the National Council of Resistance of Iran (NCRI), said that Khamenei suffered the most from protests and democratic revolution with “Death to Khamenei,” turning into a national slogan. To soothe his demoralized forces, he said, “The enemy has been defeated, but has new tricks every day.” He should expect heavier blows from youths. Khamenei has claimed to terminate the “riots” and the “hotbeds of evil”. Yes, with the victory of the democratic revolution and the establishment of democracy and people’s sovereignty, the hotbeds of four decades of evil crimes by religious fascism will be swept away forever.

November 19 – Piranshahr, northwest #Iran
Protesters are standing their ground despite attacks by the regime's oppressive security forces on the 65th night of the nationwide uprising.#IranRevolution2022#پیرانشهر pic.twitter.com/mUhUuQrliL