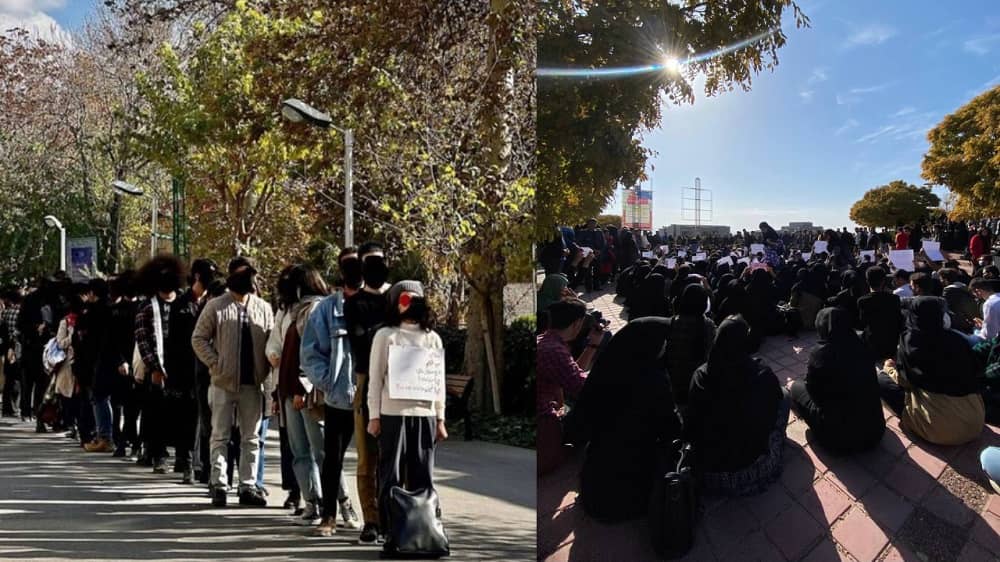 On Monday night, November 28, the 74th night of the uprising, people in different parts of Tehran and many cities staged nightly protests chanting “Death to Khamenei,” “Down with the dictator,” “No nation has ever experienced such disgraceful leader (Khamenei).” People in other parts of the capital, including Narmak, Chitgar, Tehranpars, Payambar Markazi, Sadeghieh, Ariashahr, etc., also held nightly protests. On Nabovat Street in Sanandaj and Mashhad, people rallied and chanted, “This year is the year of sacrifice; Seyyed Ali (Khamenei) will be overthrown.”

In Karaj, students protested by chanting “Death to Khamenei.” The defiant youths set fire to a large government-installed banner on Jordan Street in Tehran and a banner of paramilitary Basij forces in Babolsar. They also hoisted and installed a banner on Tehran’s highways that read, “Long live the resistance from Khash to Mahabad.” On Sunday night, November 27, youths in Saqqez attacked the house of two regime informers with Molotov cocktails. In Yazd, they set fire to a banner depicting Khamenei’s picture. A banner of Qassem Soleimani (infamous former commander of the Quds force) in Anar of Kerman and a Basij base in Rahimabad of Rudsar were set on fire. A large number of families of the detainees continued their gathering outside the notorious Evin prison on Monday as in previous days. The funeral procession of Shouresh Niknam was held at dawn on Monday in Jugheh village of Mahabad.

Esfahan Steel Company’s workers continued their strike, and the drivers joined them. As a result, the loading lines were disrupted, the containers were stopped from being loaded, and the cranes were left idle. Truck drivers went on strike in Tabriz, Qorveh, Marand, Bandar Shapur, Shahreza, Yazd, Saveh, Hamedan, Qazvin, Kermanshah, Yazdanshahr, Kashan, and Rasht terminals. The workers of the Morattab automobile factory started their third day of the strike.

The state-run news agency, Mehr, November 28, reported that the Spokesman of the regime’s Foreign Ministry had announced that there would be no cooperation with the UN’s international fact-finding mission. According to the state-run TV network, on November 28, the regime’s Judiciary chief, Gholam-Hossein Eje’i, said: “All the provinces, particularly Tehran, have been instructed not to be lenient with those who utter irrational words or spread lies.” This reflected the regime’s fear of the spread of news about protests across the country.

Farhad Ghahremani, who was arrested outside the regime’s judiciary office last September for participating in the “No to execution” protest rally, was tried on Monday, November 28, charged with causing “disturbance to public peace and order”. He was seriously injured in the attack by suppressive forces on Evin prison and transferred to the Greater Tehran prison.

November 28 – Sabzevar, northeast #Iran
Students and professors of Hakim Sabzevari University boycotted their classes today, continuing the nationwide protests against the regime on the 74th day of the uprising.#IranRevolution2022#اعتصابات_سراسری pic.twitter.com/w08BUPTqCc

November 28 – Kermanshah, western #Iran
Truck drivers are on strike and continuing the nationwide protests against the regime on the 74th day of the uprising.#IranRevolution2022#اعتصابات_سراسریpic.twitter.com/2Gdph550al