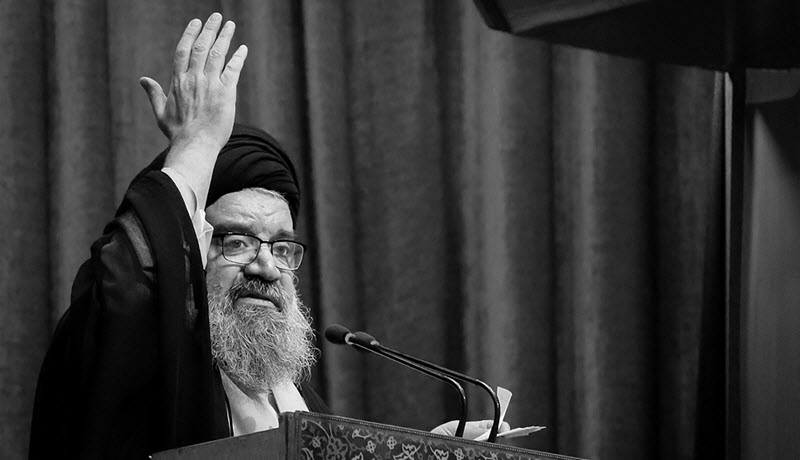 Iran Regime’s chairman of the Assembly of Experts and Friday Imam of Tehran, said: “Do not imagine that the (risk of) overthrow is over. No, the enemies will not give up thinking about the overthrow even for a moment. We must be alert.” He added, “The enemy is abusing new information tools; Telegram channel, Instagram and other tools in this field.”

Concerned by the growing popularity of the People’s Mojahedin Organization of Iran (PMOI/MEK) among the youth and rising people, Khatami said: “You foiled the PMOI’s sedition in 1996, 2009 and January 2016. You should foil the next seditions and you can do that. You foiled the PMOI’s sedition; how? You informed that there is a team of them near our home. Go arrest them. They (the suppressive forces) went and arrested them and destroyed them … Wherever you see the conspiracy, wherever you see the plotter, quickly notify the authorities, as your duty. “

While acknowledging the anger and disgust of the people from the state mullahs, Ahmad Khatami said: “Their new plan is to weaken the clergy … You saw, the rioters attacked some seminaries, worse than the Shah’s regime attack on ‘Faizia’ seminary. The Takistan Seminary had such a situation. This indicates the depth of the hatred of enemies from the mullahs.” On January 5, he had also said about the attack on government buildings: “They rushed into … the office of some Friday Imams, the Islamic Propagation Organization, and the Dispute Resolution Council.”

“Even a rial of our monthly salary is not from state budgets,” and “the salary of a mullah is between 500 and 600 thousand tomans … below the poverty line,” he said ridiculously to cover plunders by the mullahs. This criminal mullah is making these remarks whereas hundreds of millions of dollars of the country’s budget are officially spent on educating government mullahs under the guise of “Seminaries” or training non-Iranian terrorists under the title of foreign scholars. More importantly, a large part of the country’s revenues and capital are stolen by mullahs and their corrupt children. This the reason for such a deep anger and hatred of the Iranian people against the Revolutionary Guards and government mullahs.

The criminal mullah Ghias al-Din Taha Mohammadi, said in the Friday prayer in Hamadan two weeks ago: during the uprising “about 60 offices of the Friday Imams were attacked.” In most cities of Iran, clues too many crimes, robberies, moral and financial corruption are in the hands of the Friday Imams and their offices, who are representatives of Khamenei and are appointed by him.

Mullah Dorri Najaf Abadi, Friday Imam of Arak, and another member of the Board of Directors of Assembly of Experts and former minister of intelligence, said on January 17: in the course of uprising in Arak, “Our house was attacked and I was at home. In recent events, the age of the protesters was very low. The people who attacked our home, although they had covered their faces, were under 30 years of age and even under the age of 18; of course, I only say about the Central province.”

Secretariat of the National Council of Resistance of Iran
January 27, 2018

Iran: On the 16th Day, the Nationwide Uprising Spreads to 170 Cities