Iran: Retirees Protest Nationwide in at Least 18 Provinces and 20 Cities “We Will Not Give up Until We Get Our Rights” 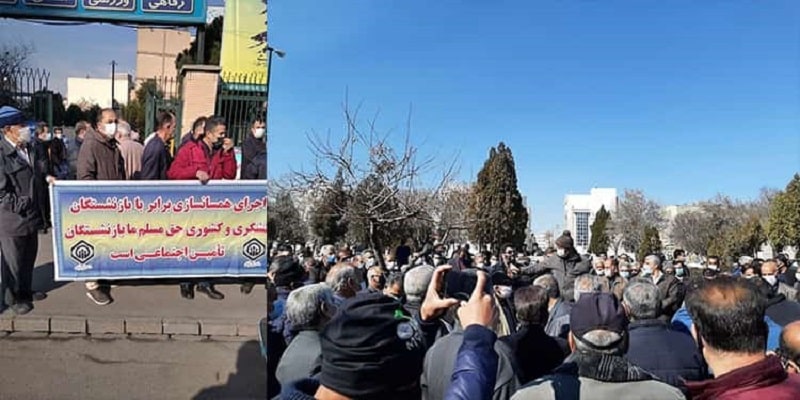 Mrs. Rajavi saluted the protesting retirees and said that the only way to resolve poverty, inflation and unemployment is to get rid of the ruling religious fascism and establish freedom and justice in Iran.

Despite the regime’s repressive measures, this morning, for the second week in a row, a large number of retirees and pensioners living on Social Security gathered in Tehran and 19 other cities to protest the deteriorating living conditions and the skyrocketing prices.

The protests, the third nationwide protests by retirees in the past month, took place in Tehran,  and in many other cities, including Mashhad, Neyshabur, Tabriz, Shiraz, Kermanshah, Isfahan, Arak, Rasht, Yazd, Ahvaz, Sanandaj, Zanjan, Abhar, Ardabil, Khorramabad, Ilam, Karaj, Babol and Shooshtar outside the social security offices of those cities.

The demonstrators chanted slogans such as: “We will not give up until we get our rights”, “Employers backed by the government officials betray us,” “We ask God to root out the oppressors,” “Expenses are based on dollar’s exchange rate, while our salaries are in rials (Iran’s official currency),” “Inflation, high prices are taking away the people’s lives, down with Rouhani,” “Only by taking it to the street, we can obtain our rights.”

Mrs. Maryam Rajavi, the President-elect of the National Council of Resistance of Iran (NCRI), saluted the brave retirees who rose up and persisted with their protests and chanted, “Only by taking it to the streets, we can obtain our rights.” She added, “So long as this regime is in power, poverty, inflation, and unemployment, as well as corruption and repression will increase. The only way to resolve it, is to get rid Iran of the ruling religious fascism and establish freedom and justice in our captive homeland.

The only way to resolve poverty, inflation and unemployment is to get rid of the ruling religious fascism and establish freedom and justice in #Iran.https://t.co/Vc9b0Byrvb