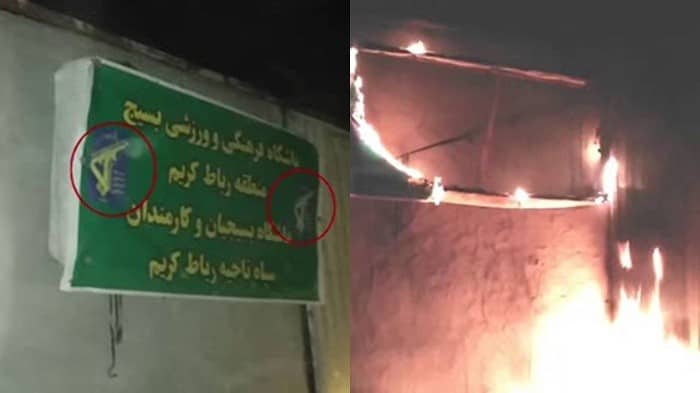 On January 18, 2021, an ill and elderly mother died in hospital after being attacked and pepper sprayed by the repressive State Security Force (SSF) in front of her house in Bandar Abbas (southern Iran).

In trying to justify the heinous murder, Bandar Abbas SSF commander, while refraining from mentioning the use of pepper spray, impudently put the blame on the people, claiming that the elderly mother’s death was due to the locals confronting the SSF.

In the early hours of Wednesday, January 20, 2021, in response to the IRGC’s outright murder in Bandar Abbas, defiant youth targeted and set fire to the entrances and front signs of seven Revolutionary Guards repressive Basij centers in Tehran, Mashhad, Khorramabad, and Kazerun. At the same time, the defiant youth torched the images of Qassem Soleimani, the eliminated commander of the terrorist Quds Force, in Tehran and Kerman.

On the morning of January 22, 2021, the defiant youth also set fire to the entrance and the signboard of the repressive IRGC Basij centers in Neyshabur and Robat Karim.

Secretariat of the National Council of Resistance of Iran (NCRI)
January 23, 2021

"Saravan rebellion will make victory, Saravan is not alone" Simultaneous with the uprising and mass protests by the rebellious youth and the people of Sistan...
Read more
Statements

Despite the deployment of IRGC and other repressive forces, the uprising and protests in Sistan and Baluchistan Province continue. On Saturday night, rebellious youths...
Read more
Statements: Iran Protest

"Only by taking it to street, we get our rights", "Our enemy is right here, they lie that it’s America", "We live in poverty,...
Read more