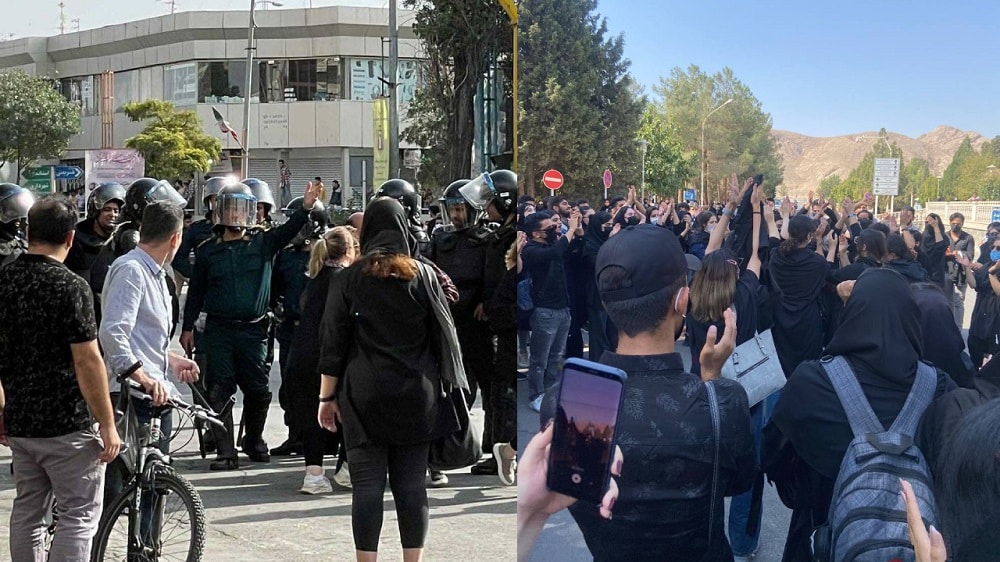 Today, Sunday, on the 38th day of the nationwide uprising, Tehran and various cities witnessed student demonstrations and teachers’ strikes. In Tehran, Sharif University students demonstrated in front of the cafeteria chanting, “Freedom, freedom, freedom” and “Basij, this is the end of you.” Students clashed with Basij agents and forced them out. The Allamah University of Tehran students protested within the university campus, chanting, “Don’t call me a seditionist, you are the oppressor,” “You are the weed, I am the liberated woman” and clashing with plainclothes agents. Architecture students of Tehran’s Soore University protested by displaying a hanging noose and writing the names of martyrs of the uprising.

Students staged demonstrations in the universities of Amir Kabir, Tehran Social Sciences, Azad in Karaj, Gohardasht, Mazandaran, Razi in Kermanshah, Azad in Dezful, Isfahan, Azad in Homayunshahr, Architecture, and Art in Yazd, Azad in Jahrom, Ferdowsi in Mashhad, and others. They chanted, “Shame on our disgraced leader,” “Death to the Supreme Leader after many long years of crimes,” “The university covered with blood, no to lectures,” “The student dies, but will not be humiliated,” “Mullahs must get lost” and “Pride students, support, support.”

Female students protested in Ardabil and chanted, “We don’t want a child-killer to rule, we don’t want it.” Schoolgirls in Sanandaj and Mahabad protested by chanting, “Death to the dictator,” drivers joined them by honking horns, and the suppressive agents fired bird shots to confront them. Female students in Tehran protested on Kashani Street.

Teachers went on strike in several cities, including Saqqez, Kermanshah, Kamyaran, Marivan, and Eslamshahr. In Rasht, the defiant youths set fire to a large picture of Khamenei.

October 23 – Zahedan, southeast #Iran
Students of Zahedan University of Medical Sciences on strike and continuing the nationwide protests against the regime on the 38th day of the uprising.#IranRevolution2022#آزادی_آزادی_آزادیpic.twitter.com/qnMmfc3Wfu