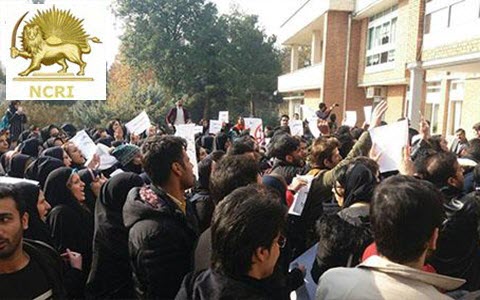 Students at the Abadan University of Oil Industry on December 7 went on hunger strike in protest to government officials’ failure to respond to students’ demands and protests.

On December 5, Sharif University of Technology in Tehran, the Melli University (Beheshti), and the University of Qom and University of Neyshabur witnessed student protest gatherings with the slogan “free political prisoners“.

Students at the University of Zanjan also commemorated Student Day by setting up a photo exhibition of student activities against the regime along with slogans such as “Student should not be in prison, university is not garrison“. In Urumia, students also chanted slogans in their gathering against gender discrimination, the charging of tuition fees by public universities and the poverty of students.

On Monday morning, December 4, students from the universities of Tehran, Allameh Tabataba’i and Kharazmi (Teachers Training) and the Melli University gathered and protested while chanting:

“Students are willing to die, but will not accept humiliation”, “gender discrimination is condemned”, “no to gender discrimination” and “from Babol to Abadan, there is repression of students”, “girls’ dormitories have become prisons“, and “free education is our absolute right“.

They also protested the widespread corruption and poverty and unemployment and its damaging byproducts, with slogans such as, “Both Parliament and Government are the Control Room of Plunder”, “Housing, jobs, treatment, and free education are workers’ demands”, “There is forced labor at the university and unemployment after graduation“.

Students at Tehran University performed a mock display of the crackdown, arrests, torture, and execution of students. The regime’s intelligence agents at the university (Herassat) attacked the rally and arrested one of the students. Students chanted slogans in protest to his arrest unanimously: “University is not a garrison, detained students must be freed“.

Students at the Sistan and Baluchestan University in Zahedan also protested in a gathering on December 2 against the presence of Rouhani in that university in the run-up to Student Day. They chanted ” Students are willing to die, but will not accept humiliation” and “Imprisoned students must be released“.

Secretariat of the National Council of Resistance of Iran
December 8, 2017