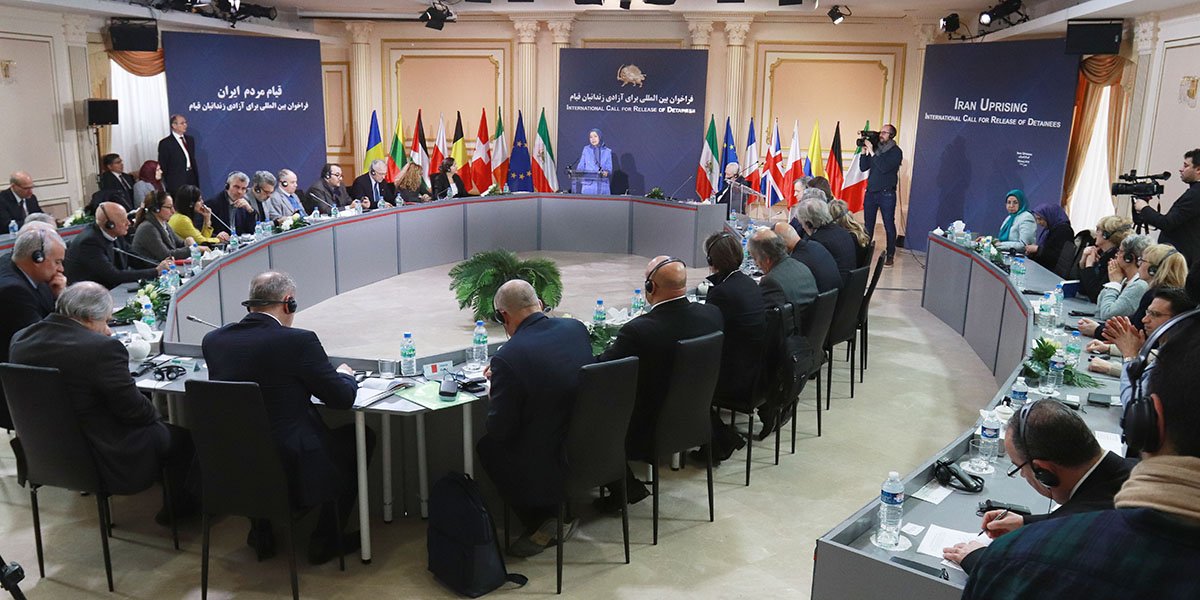 Maryam Rajavi calls for urgent action to free prisoners of the uprising, guarantee freedom of speech and abolish the compulsory veil

Maryam Rajavi called on the European Union and its member states to adopt effective measures and binding decisions to compel the religious fascism ruling Iran to free prisoners of the uprising, guarantee freedom of speech and assembly, end suppression of women and abolish the compulsory veil.

The President-elect of the National Council of Resistance of Iran issued the call during a conference entitled, “Iran Uprising – International Call for Release of Detainees” on Friday, February 9, 2018, where lawmakers and political personalities from 11 European countries participated.

Mrs. Rajavi told the conference: “Thirty-nine years of bloodshed and crimes, discrimination against and suppression of women, repression and censorship is enough. Europe must end its silence and inaction and distance itself from the clerical regime. This regime has no future and appeasing it will only increase the price of freedom for the people of Iran. Appeasement will fuel more wars and crises in the region but of course, it cannot prevent the overthrow of the clerical regime by the people of Iran.”

In a joint declaration, the participants declared support for the call issued by Maryam Rajavi and reiterated, “The European Union must refrain from dealing with companies and individuals affiliated with the Revolutionary Guard Corps (IRGC) and other organs of suppression. The continuation and expansion of political and economic relations with the Iranian regime must be conditioned on freedom of prisoners and end to executions. We also urge the formation of an international UN commission to investigate into the arrests and disappearances of Iranian protestors.”

Mrs. Rajavi said, “The driving force of the protests –which rapidly spread in a few days to 142 cities with chants of ‘death to Khamenei,’ ‘death to Rouhani,’ and ‘reformists, hardliners, beware that the game is over’– was made up of women and the deprived social sectors. Despite any ups and downs, the uprising will move on. The regime is incapable of stopping it. There are signs of alarm and concern even inside the IRGC and Bassij militia. The wall of fear has been cracked, and nothing including arrests, killings and torture can prevent the advancement of the protests to overthrow the regime.”

“The regime and its lobbies,” she added, “try to scare the people of Iran and the International Community from a repeat of the Syrian scenario and eruption of an internal conflict in Iran to contribute to the regime’s survival. The reality, however, is that the presence of a powerful deeply-rooted Resistance actually guarantees a united and sovereign Iran.” 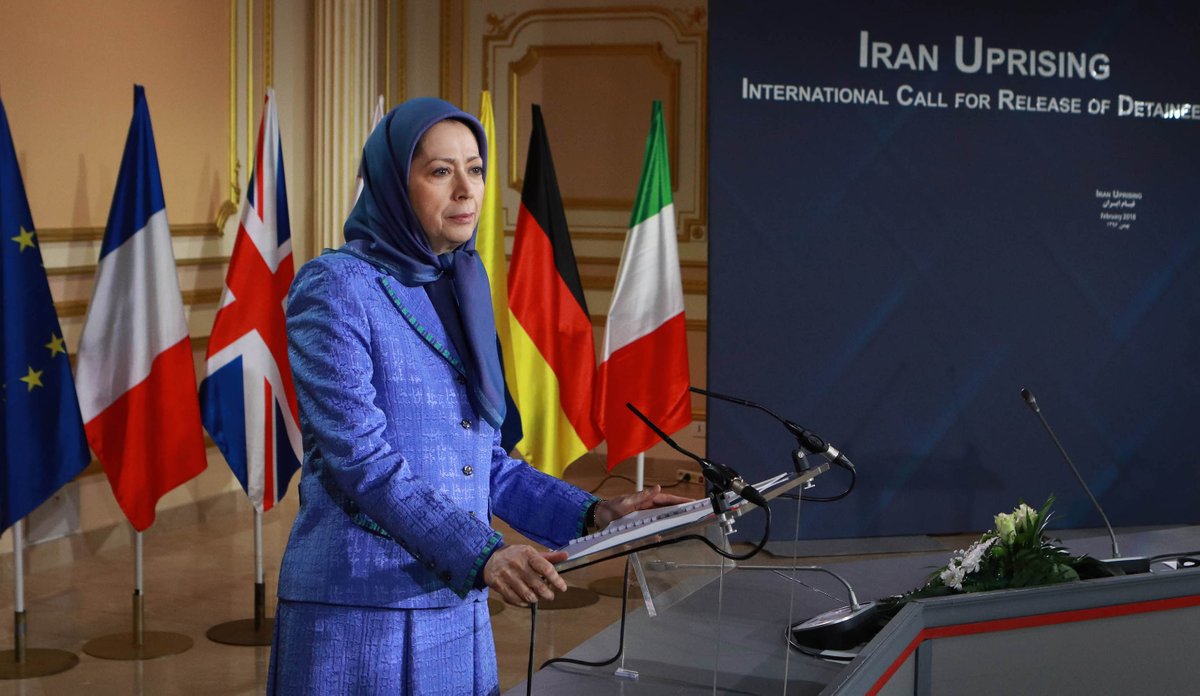 Maryam Rajavi emphasized, “More importantly, the clerical regime is the main cause of crisis and slaughter in Syria. With the mullahs’ overthrow, not only Iran will not become another Syria, but the crises in Syria and Iraq and other countries in the region will be replaced by peace, tranquility and democracy.”

Mrs. Rajavi asserted, “The Iranian Resistance seeks a free and democratic Iran, separation of religion and state, equal rights for all ethnic groups and their autonomy in the framework of Iran’s territorial integrity, gender equality, and the abolition of the compulsory veil and all the medieval laws against women.

Participants in the “Iran Uprising” conference reiterated in a joint declaration, “These protests coupled with the deteriorating economic conditions of the regime including unemployment and high prices, mark the regime’s terminal phase. The regime’s President warned that by not listening to the people, the regime might face a destiny similar to the Shah’s. In a telephone conversation on January 2 with the French President, he asked France ‘to take action against a Paris-based Iranian opposition, PMOI, which he accused of fomenting the recent protests. (AFP)’ ”

On January 9, 2018, the mullahs’ supreme leader Ali Khamenei clearly pronounced that the driving force behind the uprising in Iran was the PMOI and that “they had prepared for this since months ago… to organize, to see this and that and recruit certain people in the country…”

Ms. Ingrid Betancourt, former Columbian presidential hopeful, also addressed the conference. In part of her remarks, she said, “The uprising in Iran is dramatic and gives us hope. What seemingly began as a protest over economic problems mushroomed into a nationwide uprising to overthrow the regime in Iran. It is not an isolated, non-organized incident. It is a grassroots movement. Things will never be the same in Iran after the uprising. This has lots of consequences and it should make us change the way we in the West look at Iran. They call for a radical change of regime. The people of Iran who take part in these protests have the same slogans that Mrs. Rajavi has said for so many years. There is a direct link between the protests and the Iranian Resistance, not just in having the same slogans; but they also have the same objectives. The Iranian Resistance has been fighting for so many years to bring about regime change, and that is what the people of Iran want. We in the West can no longer have a policy of appeasement towards the Iranian regime when the people on the streets of Iran are saying they don’t want appeasement of the regime. It is time that our governments around the world recognize the legitimacy of the National Council of Resistance of Iran.”

Lord Anthony Clarke, member of the House of Lords and former leader of the Labour Party, in his remarks to the conference said, “The Iranian resistance, in particularly the network of the People’s Mojahedin Organization of Iran (PMOI/MEK), has played a pivotal role in organizing the protests in Iran as it did a remarkable job in breaking the ayatollahs censorship and informing the world about the scope of the protests. On January 9, Supreme Leader Ali Khamenei made public statements acknowledging the leading role played by the PMOI in planning and executing the protests. The fact is that more young people are attracted to the Iranian resistance and the calls by Mrs. Rajavi. It is time for Europe to pay heed to this reality and to adopt its policy accordingly.”

The Hon. Martin Patzelt, member of the German Bundestag’s Human Rights Committee, said: “We, as Europeans are morally obligated to stand by young Iranian protesters who clearly and demonstrably showed and expressed their desire for regime change and attaining freedom and democracy. The notion that Iranian political landscape is defined by contest between ‘moderates’ and ‘hardliners’ was proven to be a myth. Europe should speak out in defense of detained protesters and demand their immediate, unconditional release. Silence in face of Tehran’s unbridled terror in dealing with protestors who demand bread and freedom is totally unacceptable. We should expose the wrong-doings and inhumane attitude of the Iranian regime.”

Participants paid enthusiastic attention to an exhibition of images of the Iranian people’s uprising on display on the sidelines of the conference.

Secretariat of the National Council of Resistance of Iran
February 9, 2018

Previous articleIran: Workers’ Trade Unions Call on Authorities to Set Minimum Monthly Wage at 5 Million Toman ($1111)
Next articleSiege of East Ghouta Is a War Crime and Is Strongly Condemned