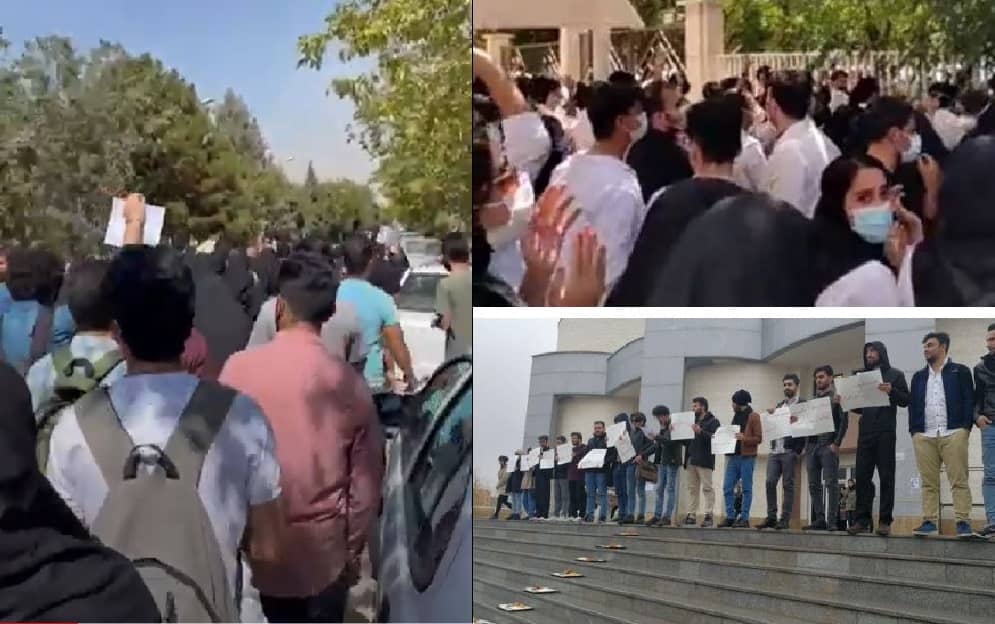 The Continuation of Strikes and Protests in 62 Universities Throughout Iran

On Wednesday, September 28, despite the security environment and deployment of a herd of Revolutionary Guards (IRGC), State Security Force (SSF), and intelligence agents on the scenes, the nationwide uprising of the Iranian people continued for the 13th day. Tehran and various cities, including Shiraz, Susangerd, Ahvaz, Isfahan, Qom, Sabzevar, Bandar Abbas, Yazd, Mashhad, Najaf Abad, Dezful, Sanandaj, Kerman, Mallard, and Gohardasht Karaj, were the scenes of demonstrations and clashes between the people and youth with the suppressive forces.

At 10:00 p.m. on Wednesday, the rebellious youths attacked the regime’s Prisons Organization on Jouriki Boulevard in Saadat Abad, Tehran. This is a center that issues death sentences and tortures those arrested in the uprising.

In Khani Abad and Nazi Abad, the suppressive forces opened fire on people. Reciprocally, many young motorcycle riders from the surrounding areas rushed to their help. In Marzdaran, Valenjak, Chitgar, and Shahrek Farhangian areas, while the sound of the gunfire was being heard, people on the rooftops chanted, “Death to the dictator” and “Death to Khamenei.” In Valiasr, de facto martial law was implemented; a group of IRGC had been stationed every hundred meters, and two checkpoints were set up in the area.

In Mashhad, the Ahmedabad, Koi Talab, Jalal Al Ahmad Street, and Tabarsi districts were the scene of people’s uprising and clashes with the regime’s suppressive forces. In Tabarsi and Talab areas, clashes broke out between people and the suppressive forces.

In Najafabad, Isfahan, at 7:30 pm local, a large number of people gathered in Mirdamad Square and National Garden, where a fierce clash ensued between the people and the IRGC. Due to the resistance and persistence of the protesters, the security forces could not quell the protests.

In Gohardasht, Karaj, the IRGC opened fire on the people, who responded by throwing rocks. In Mallard, the suppressive forces opened fire on people. The youth set fire to the vehicle of an intelligence agent.

Demonstrations also took place in Qom, Zanbil Abad, Safia, Amini, and Bayat. The people punished an agent who had attacked the people and set his motorcycle on fire.

In Yazd, there were heavy clashes between the people and the IRGC, which opened fire on people, wounding many. The youth punished a criminal agent.

In Dezful, in the town of Modarres, there was a clash between the youth and the suppressive forces. The SSF opened fire on people, and several demonstrators were wounded.

On Wednesday, the students of Isfahan, Shiraz, and Kashan universities protested, chanting, “Student will die, but will never accept humiliation” and “The detained students must be freed.” In Sabzevar, students of Hakim Sabzevari University demonstrated chanting, “Honorable Professors, support, support.” In Rasht, students burned Khamenei’s banner.

Mrs. Maryam Rajavi, the president-elect of the National Council of Resistance of Iran (NCRI) said, despite the brutal repression, women and young people remain defiant and challenge the regime’s entirety. Their chants of “death to the dictator” resonate in Iran, calling for to end to Khamenei’s rule.