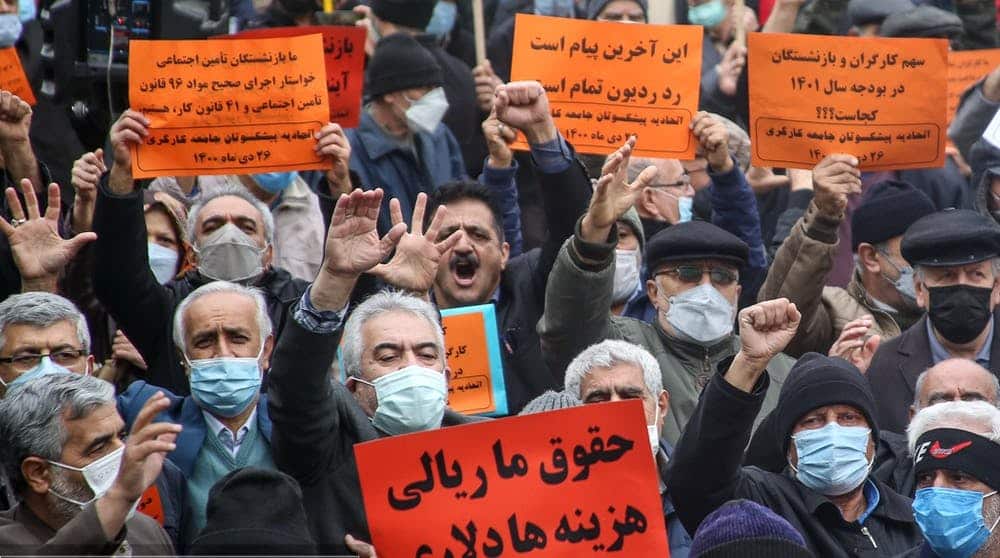 Protesters’ chant: “We will not rest until we obtain our rights,” “Neither the parliament nor the state care about the nation”

Social security pensioners who had gathered in front of the regime’s parliament in Tehran and outside the provincial social security offices in other cities chanted, “Retirees die, but they will not accept discrimination,” “We will not rest, until we obtain our rights,” “Employees and retirees let’s unite,” “Enough of empty promises, our table is empty,” and “neither the parliament nor the state cares about the nation.”

In Tehran, in addition to gathering in front of the regime’s parliament, telecommunication retirees gathered in front of the plundering center known as “The Execution of Imam Khomeini’s Order” in Tehran, demanding equal rights. By exposing the deceptive promises of the regime agents, the retirees emphasized the need to continue their rallies and protests until they achieve their objectives.

To divert the retirees’ protest, the clerical regime tried in vain to gather some of its supporters in front of the parliament, but the retirees ignored them and chanted their own demands.

As long as this regime is in power, poverty, inflation, unemployment, corruption, and repression will continue and intensify. The rights of workers, laborers, retirees, and other sectors of the society will be fulfilled only if the plundering regime is overthrown, and democracy and the people’s sovereignty are established.