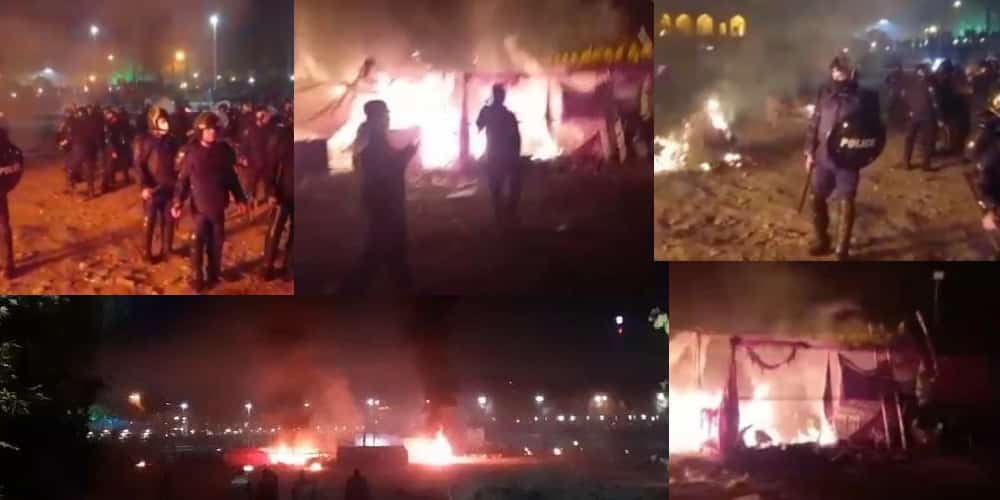 In the early hours of Thursday, November 25, 2021, the repressive SSF and IRGC special units attacked the Isfahan farmers where they were holding a sit-in on Zayandeh Rud Riverbed with vehicles and motorbikes, and using tear gas, and set fire to the farmers’ tents. The farmers threw rocks at the repressive forces and repulsed their assault.

Subsequently, the repressive forces, especially plainclothes agents, were stationed in the Zayandeh Rud riverbed, preventing farmers from being present on the site and erasing the signs of the crime clearing the area where the tents were set on fire using municipal machinery.

A night before, by attacking the farmers and tearing and destroying their tents and banners by plainclothes agents, the clerical regime had tried to force the farmers to evacuate the location and end their sit-in. Failing in their attempts, the repressive SSF and the IRGC special units directly attacked the farmers this morning. However, fearing popular protests, it described the attack as the work of some “thugs and profiteers” who opposed the farmers’ agreement with the regime.

Farmers and people of Isfahan announced that if the water problem is not solved, they will hold a large demonstration on Friday, November 26, extending their protests to demand their water rights.