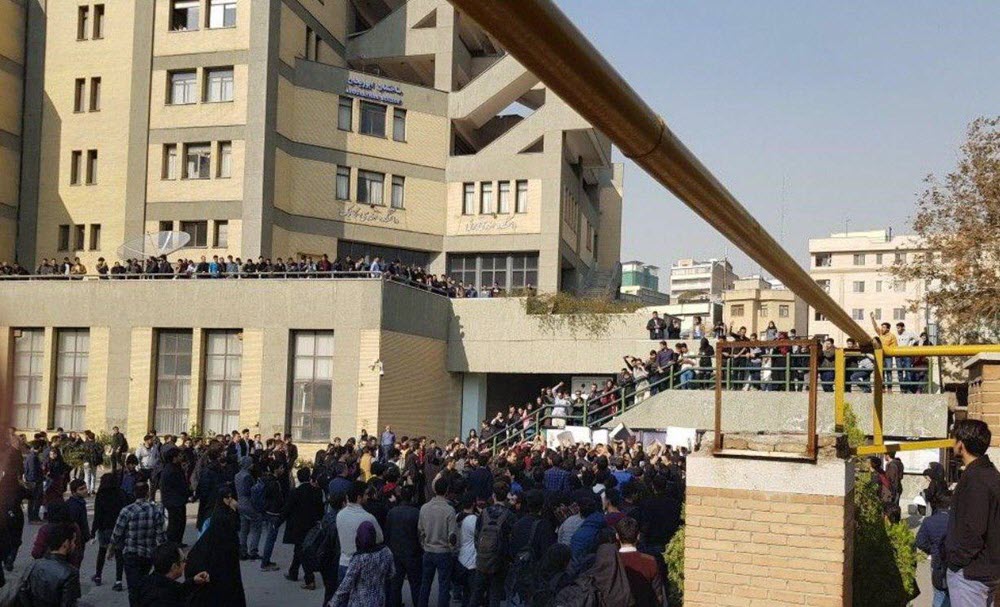 Demonstration at Tehran Polytechnic with the slogan: “Cannon, Tank, Machine Gun do not work anymore”

On Tuesday, December 4th, on the eve of the Student Day (December 7th), students from various universities including Tehran Polytechnic, Tabriz Sahand and Babol Noushirvani staged a protest rally.

In Tehran, students of the Polytechnic University resisted and confronted and clashed with the Basij mercenaries who intended to disrupt the gathering. Students chanted: Imprisoned workers must be released; Imprisoned students must be released; Cannon, Tank, Machine Gun do not work anymore; Real teacher should be released; Death to this deceitful government.

Students at Babol Noushirvan University carried placards at their protest gathering which read: Stop suppression of students; Student would rather die than accept this humiliation.

A group of students at Semnan University of Medical Sciences protested against Rouhani when he entered the university hall. They chanted: Inflation, high prices, you, Rouhani respond!

The day before, on the occasion of the Student Day, students from the Faculty of Social Sciences of Tehran Allameh University, Kermanshah Razi University, and Sirjan University of Medical Sciences protested against the regime’s suppressive measures against the students. Students at Razi University chanted slogans in support of the striking workers: Student, Worker, Teacher, United, United; Teachers are in jail from Khorasan to Tehran; Free imprisoned teachers.

At Chamran University of Kerman, ‘Herasat’ department, a branch of the Ministry of Intelligence at the universities, has imposed a repressive instruction. According to this medieval instruction, students are forbidden from going to each other’s rooms, and if a student is seen in another room, students in that room will be fined 100,000 tomans.

On Tuesday, December 4th, deprived workers of Ahwaz steel continued their courageous strike for the twenty-fifth day. The strikers rallied outside the regime’s governorate and in the city bazaar with the slogans: Our country is place of thieves, it is unique in the world; neither the ruler nor the government mind the nation; Worker would rather die than accept humiliation; Imprisoned workers must be freed.

Previous articleIran: A Tsunami of Poverty That Stems From the Regime of Mullahs
Next articleEU Joins U.S. in Condemning Iran Regime for Ballistic Missile Activity