Students protest in Tehran and Khashan 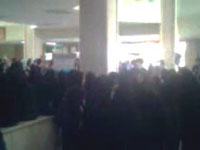 NCRI – Students in Tehran’s Azad University, southern branch, staged a protest today chanting “Students will die but will not be humiliated,” “Torture and rape have lost their effect,” “Free political prisoners” and “Death to dictator.” This was their second protest move in eight days against repressive measures on students and presence of Bassij force in the university.

In recent two weeks students in Tehran have been holding protests in Sharif, Polytechnic, Allameh and Khaje Nassir Toosi universities and Azad universities central, southern and Roodehen branches. University students in various other cities including Ahvaz, Orumieh, Karaj, Rasht, Yasuj and Kashan have also been protesting against the regime in its entirety and suppression of students and prisoners. These protest moves have been going on in preparation for November 4 major uprising.

Secretariat of the National Council of Resistance of Iran
November 3, 2009