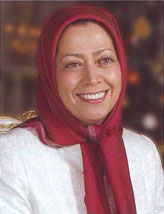 Maryam Rajavi: EU should remove the PMOI from the terrorist list, offer apology and recognize the Iranian Resistance

NCRI – A few hours ago the House of Commons and the House of Lords unanimously voted to remove the People's Mojahedin Organization of Iran (PMOI[MEK]) from the list of proscribed organizations. Therefore, the PMOI is finally out of the list of proscribed organizations in the UK. The order was laid last month by the Home Secretary before both Houses of Parliament on the order of the British Court of Appeal.

She added that the seven-year-battle between the people of Iran, the Iranian Resistance and advocates of democracy on one hand and the mullahs' inhuman regime and the appeasers and foreign allies of the regime on the other, led to this victory with the decisive decision of both the Judiciary and the Legislature and its acceptance by the government.

Mrs. Rajavi congratulated members of both Houses of the British Parliament, particularly the 35 parliamentarians who challenged the PMOI's proscription.

She described them as the awaken conscience of the people of Britain who rose up against a great injustice to the Iranian people and their Resistance.

She said that the Council of European Union should immediately and officially declare that the PMOI [MEK] is out of the EU list now that the process is complete and the PMOI [MEK] is out of the list in the UK. It should also apologize for this great injustice. Since the legal basis for the EU's terror listing was the proscription by the UK government, today, as far as the PMOI [MEK] is concerned, this listing in the European Union is annulled. The EU should acknowledge this fact now and put an end to its defiance of the court ruling and the rule of law.

Mrs. Rajavi added that the designation of the legitimate opposition to the clerical regime in terror lists had helped prolong the regime in Tehran to the detriment of democratic change in Iran more than anything else in the past decade. Now that it is proven that this policy and the terror label has been misguided, the time has come for the international community to recognize the resistance of the Iranian people against the religious dictatorship and for the establishment of democracy in Iran.

Secretariat of the National Council of Resistance of Iran
June 23, 2008