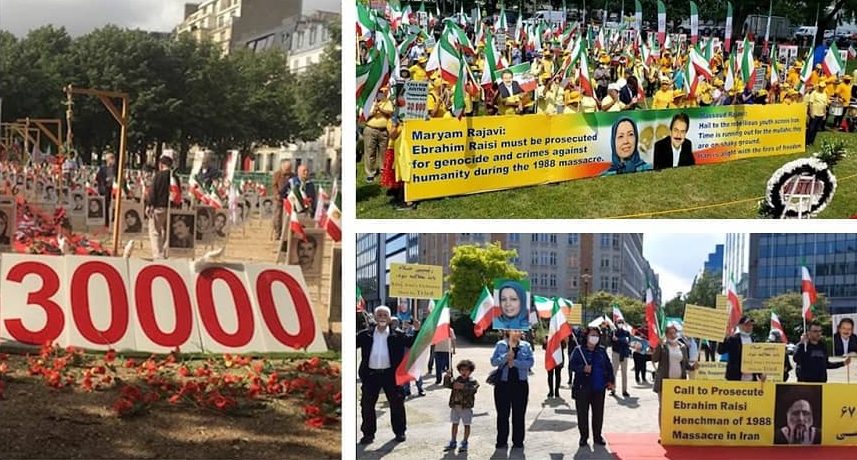 Iranians demand prosecution of Ebrahim Raisi by an international tribunal for genocide and crimes against humanity.

As Ebrahim Raisi, the henchman of the 1988 massacre became president, Iranians in European countries, the United States, and Canada took to the streets to express their solidarity with the uprising in different cities and regions of the country and call on the international community to condemn the 1988 massacre as genocide and a crime against humanity.

They also called for the prosecution of the leaders of the clerical regime, especially Khamenei, Raisi, and the Judiciary Chief Gholam Hossein Mohseni Eje’i.

On Monday, August 2, a large photo exhibit of the regime’s crimes in the 1988 massacre, the November 2019 mass killing, and the brutal repression of our compatriots in the Khuzestan uprising was held in Washington, DC near the U.S. Congress. The exhibition was decorated with 30,000 red flowers to symbolize the 30,000 martyrs to the cause of Iran’s freedom during the 1988 massacre.

Mrs. Maryam Rajavi, the President-elect of the National Council of Resistance of Iran (NCRI) delivered a video message to the event. Referring to the uprisings in Khuzestan, Tehran and other cities, Mrs. Rajavi said: “Khamenei, his IRGC, and the mass murderer, Ebrahim Raisi, will never be able to silence the voice of Iranians and the youth by bullets, tear gas, detention, and torture, or by shutting down the internet. The appointment of Ebrahim Raisi to the regime’s presidency signals the end for the clerical regime. Raisi embodies the regime’s brutality. Western governments need to realize that the policy of engagement and appeasement of religious fascism has been a failure and is outdated. The UN Security Council should arrange for the international trial of the leaders of the regime, especially Ali Khamenei, Ebrahim Raisi, and its Judiciary Chief Eje’i, for committing genocide and crimes against humanity.”

Senator Joseph Liebermann said any deal with the clerical regime was as worthless as Neville Chamberlain’s peace deal with Hitler. The solution is regime change, which the Iranian people want. A democratic Iran would be in the interest of the Iranian people and all the people of the world.

Iranians and MEK supporters staged demonstrations in Germany, the Netherlands and Canada. Elaborate exhibitions in memory of the martyrs of the 1988 massacre, the martyrs of the November uprising, and the recent Khuzestan uprising were also held in Berlin, Münster, Stockholm, The Hague, and Paris.

Parliamentarians and political figures spoke at the rallies. A number of former political prisoners also described their observations, exposing the crimes committed by Raisi and other regime leaders, especially during the 1988 massacre.

Previous article
Iran: The EU Must Apply Magnitsky Act For Ebrahim Raisi’s Role In The 1988 Massacre
Next article
Iran’s New President Should Be Isolated Pending His Arrest for Crimes Against Humanity