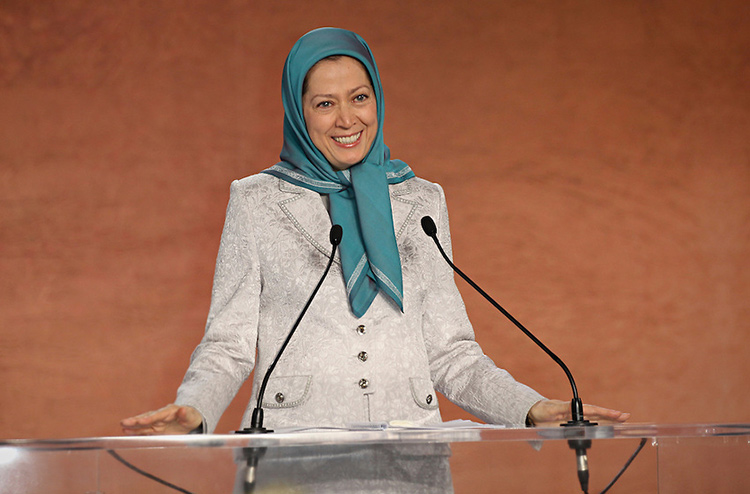 On Sunday, January 24, 2016, a conference was held at the office of the National Council of Resistance of Iran in Auvers-sur-Oise (north of Paris) with political personalities and elected representatives of France participating. The conference was entitled, “Solidarity of France’s Elected Representatives with the Iranian Resistance against Extremism under the Banner of Islam.”

In her remarks to the conference, Mrs. Rajavi noted: During the regime’s presidential elections, Rouhani promised to promote moderation. However, he is coming to Europe in a few days’ time with an ominous record of 2,000 executions, consecutive executions of political prisoners, rocket attacks on Camp Liberty, rampant poverty, unemployment and economic stagnation in Iran, stepped up deadly interferences in Syria and Iraq, warmongering in Yemen, terrorism in Kuwait and Bahrain, testing new missiles, etc.

Rajavi pointed out: Rouhani is travelling to Europe to cover up the regime’s weakness and isolation. He is trying to put up a moderate face to cover up the executions in Iran and the mullahs’ role in the massacre of Syrians.

She added: The Iranian people expect France not to give ground to Rouhani’s deceptions and stand by the people of Iran. This is defending both humanity and the values of France, and it is the right policy.

Rajavi asserted: To justify supporting the mullahs, some claim that Rouhani disapproves of these policies but Rouhani approves them. He defends the executions. He supports Bashar Assad’s dictatorship. He tries to expand the Revolutionary Guards’ missile program and he advocates religious tyranny.

In another part of her speech, Maryam Rajavi noted the Iranian regime’s reluctant compliance with the nuclear agreement last week and added: Under the pressure of the Iranian Resistance’s revelations and sanctions by the international community, the Iranian regime had to give up its ominous nuclear project. This was a very important experience because it proved that the Iranian regime is sensitive to pressure.

She reiterated that the only road to peace and stability in the region is eviction of the Iranian regime from the region, namely from Syria, Iraq, Lebanon and Yemen, and compelling it to stop the massacre of defenseless people of Syria.

Expressing her abhorrence over the dreadful tragedy of November 13 in France, Maryam Rajavi described the cancerous growth of Daesh as one of the destructive consequences of the mullahs’ hegemonic ambitions in the region. She said: When Iran’s ruling mullahs helped their puppet governments in Iraq and Syria to suppress the people of these countries, the opportunity emerged for Daesh to grow and spread.

Mrs. Rajavi pointed out: The Quran says there is no compulsion in religion. For this reason, we decisively reject the mullahs’ Sharia laws that are contrary to Islam. We reject despotic regimes whatever their names, Velayat-e Faqih, Islamic Caliphate or Islamic State. The genuine Islam promotes freedom and women’s equality, and calls for popular sovereignty and tolerance.

Iranian artists members of the NCRI, conductor and composer Mohammad Shams and musician Hamidreza Taherzadeh, performed in the gathering.

Secretariat of the National Council of Resistance of Iran
January 24, 2016