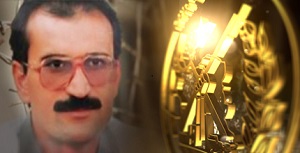 The clerical regime hanged Gholamreza Khosravi of the People’s Mojahedin Organization of Iran (PMOI/MEK), 49 years-old, in Gohardasht Priosn in the early hours of Sunday, June1, for supporting the PMOI and standing up to the despicable Velayat-e-faqih rule (the absolute rule of clergy).

The so-called Prosecutor’s Office of the clerical regime this morning declared the slain PMOI activist Gholamreza Khosravi was charged with “Moharebeh (enmity against God), through active effort to pursue the goals of the PMOI”, disseminating information “through medias affiliated to the PMOI”, “providing financial contribution”, and connecting “a number of people to PMOI organization”.
The clerical regime Executed Gholamreza to avenge the prisoners of ward 350 of Evin Prison and other prisoners who are resisting in the prisons of the religious fascism ruling Iran and on the verge of June 20 (the beginning of the resistance against the regime in 1981). The mullahs henchmen and torturers considered Gholamreza as the key person in the protest and resistance of political prisoners in the Ward 350 of Evin Prison.
Gholamreza Khosravi was placed on the verge of execution on several occasions in the past but his execution was halted due to international protests and warnings and the regime’s concerns regarding the reaction and the public opinion.

The mullahs’ henchmen put him under sever duress until the last days but despite intolerable prison conditions and serious ailment due to years of imprisonment, he remained steadfast in his commitment and aspiration for freedom of Iranian people and while even in solitary confinement his hands and feet were chained, he remained firm.
Gholamreza Khosravi was born in Abadan (southern Iran). He has a 17 years-old son and was an expert in welding and installation of industrial facilities. He was arrested in two occasions and spent 12 years in total in the clerical regime’s dungeons.

The Secretariat of the National Council of Resistance of Iran
June 1, 2014

Previous articleIran- Execution of PMOI Activist after Twelve Years of Torture and Imprisonement
Next articleMaryam Rajavi: Executions in Iran and Ashraf, futile attempts to save a crumbling regime