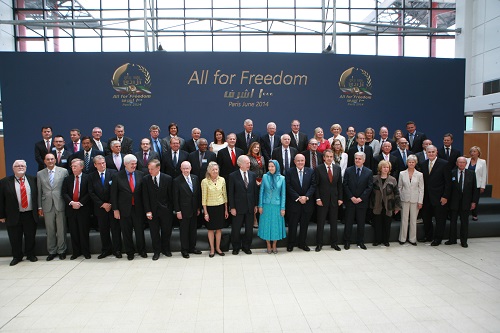 Grand gathering of Iranians and supporters of resistance from 69 countries in Paris – Villepinte:

Speech by Maryam Rajavi on Iraq crisis, meddling by and impact on the Iranian regime, Rouhani’s record in a year, and challenges of nuclear negotiations

Maryam Rajavi will offer a speech to this gathering about the crisis in Iraq, the mullahs’ regime meddling, the strategic impact of Iraq in crisis on the trend of developments in Iran, the developments in Syria, as well as the prospect of the mullahs’ regime. Mrs. Rajavi, together with the present personalities, shall discuss the solution to the current crisis in Iraq.

In this meeting, held one year after the clerical regime’s President Mullah Rouhani took office, Mrs. Rajavi shall assess Rouhani’s record and any accomplishment of his promises in political, economic and social realms, in particular the catastrophic trend of the nationwide suppression and execution inside Iran and the continuation of regime’s warmongering in the region.

On the eve of the nuclear accord deadline, Rajavi shall also discuss the challenges ahead in the P5+1 negotiations with the Iranian regime to contain mullahs’ nuclear project and the mullahs’ regime deadlock in the final solution aimed at preventing the mullahs from acquiring the bomb.
Dozens of prominent political figures, as well as special speakers from Syria, shall address this gathering on behalf of large delegations that have participated in the event. A number of prominent international figures also sent messages to declare their solidarity with this gathering.

Representatives of Iranian communities and associations, including the youth represented by more than 300 association will address the gathering.

The memory of martyrs of the path to freedom in Iran will be honored in this program. Messages of political prisoners from mullahs’ regime prisons in support of the Iranian Resistance will be read out.
Secretariat of the National Council of Resistance of Iran
June 27, 2014