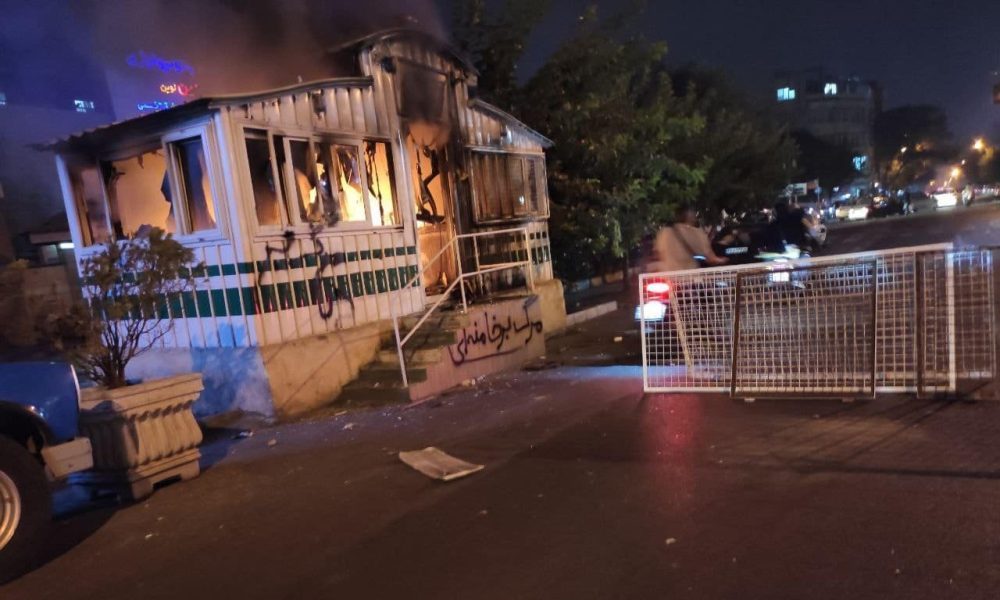 Capturing the governor’s office, setting fire to the police station, repressive forces’ vehicles, and pictures of Khamenei and Soleimani

On Wednesday, September 21, the sixth day of the nationwide uprising, continued with protests spreading to different cities and universities.

In Tehran, people demonstrated in different districts and chanted, “This year is a year of sacrifice. Seyyed Ali (Khamenei) will be overthrown”. By lighting fires, the people at Autobahn Park blocked the streets, and in Nazi Abad, south of Tehran, youths clashed with repressive forces.

In Urmia (northwest), people protested on Molavi Street in front of Imam Reza Hospital, chanting, “I will kill whoever killed my sister,” and “Mullahs must get lost”. They freed one of the youths arrested by the suppressive forces while chanting “Shame on you! Shame on you!” They also stripped one of the SSF of his uniform and set several motorcycles of the special unit on fire. On Wednesday morning, a large crowd in Urmia bid farewell to a young man killed during the protests in Urmia, chanting “Death to the dictator” and “Death to Khamenei.”

In Amol (north), people attacked the city’s governor’s office and confronted the repressive forces chanting, “Have no fear, we are all together,” and took possession of an anti-riot unit vehicle.

Demonstrations took place in Isfahan, Qom, Mashhad, Zahedan, Quchan, and Semnan. In Garmsar, the youth set Khomeini’s statue on fire. In Varamin, while chanting “Shame on you! Shame on you!”, the youth set fire to the SSF’s van, and in Baqir Abad Qarchak, they destroyed a large photo of Khamenei by splashing paint on it. In Sardasht, the angry people clashed with the repressive forces, and while the repressive forces were shooting at the people, the people confronted and forced them to flee.

On Wednesday morning, Tehran University students staged a protest chanting “Death to the dictator,” “Khamenei is a murderer, his rule is null and void,” and “All these years of crime, down with this regime.”. Basiji agents, while chanting, “Morality police is an excuse, the entirety of the system is the target,” attacked the students from behind, but the students resisted.

On Wednesday, in his first speech after the start of the nationwide uprising, Ali Khamenei, the Supreme Leader of the regime, did not make any reference to the protests and the people’s anger and hatred against the regime.

On Wednesday, Tasnim News agency, affiliated with the terrorist Quds Force, wrote, “Some people who were present in some areas of Tehran tonight… were using unprecedented tactics in street battles which were indicative of their previous coordination and training…Some MEK-affiliated channels also widely broadcast videos of arson and police beatings and incite those present in the gatherings to spread these actions.”

In a report on Internet restrictions, the State-run Akharin Khabar Telegram quoted Communications Minister Issa Zarepour, as saying on Wednesday, “Due to security issues and some of the discussions that exist these days, restrictions may sometimes be decided upon and applied by the security agencies.”

Referring to the failure of the huge propaganda apparatus of the mullahs, the state-run newspaper Etemad wrote, “Today, the official media – for whatever reason – has lost its breath.” It is like a house that crumbles brick by brick and collapses.”

On September 21, the state-run Mehr news agency wrote, IRGC Colonel Heydari, the commander of the women’s special forces unit, said, “For the first time, the women’s unit of the special police units entered the field to control the riots… For the first time, we witnessed the presence of women among the people who were disturbing the order and security; some of these women were leaders of the protesters and, in addition to propaganda, they were chanting regime change slogans… It was decided that the women’s unit arrest of women who were disrupting order and security.” He added, “so far, we have arrested eight women who were the leaders of the protests.”

Mrs. Maryam Rajavi, the President-elect of the National Council of Resistance of Iran, saluted the brave protesters all across the country and said that the fighting spirit of women and girls who, in step with freedom-loving youths and men, are forcing the IRGC into retreat with chants of “Death to Khamenei,” heralds the advent of a democratically elected republic based on gender equality and people’s sovereignty. She added, In the struggle to overthrow the religious dictatorship and establish democracy and popular sovereignty in Iran, the solidarity among different sectors, students, teachers, educators, farmers, and workers, is a thousand times stronger than Khamenei’s repression and terror.