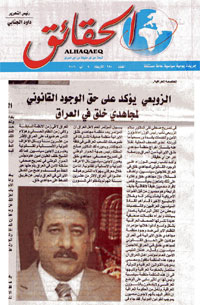 NCRI – According to Iraqi press, Iraqi Deputy Prime Minister for Security and Services, Dr. Salam al-Zubai reiterated PMOI members’ right to political asylum in Iraq and said, "They enjoy the special status of protected persons under the Fourth Geneva Convention and are protected by United States forces."

The daily al-Safir wrote, in recent weeks, the most important Iraqi political leaders and personalities and several parliamentary factions have in their statements reaffirmed PMOI members’ legal status in Iraq and condemned the Iranian regime’s measures against them. Dr. Adnan al-Dulaimi, secretary general of the Iraqi People’s Congress, Dr. Saleh Mutlaq, president of the Iraqi National Dialogue Front and Shekh Khalaf al-Elyan, secretary general of the Iraqi National Dialogue Council are among such Iraqi political personalities.

This organization is a political one, which has not had any negative effects on Iraq’s situation or Iraqi internal affairs. We hope that the Iraqi government, in accordance with international law, will view them as political refugees, he was quoted as saying by the daily al-Iraq al-Youm.

The daily al-Haqayeq quoted Sheikh al-Elyan as saying, "Iraq’s security problems will be solved by taking a clear position on Iranian meddling in Iraq and not by exerting pressure on the PMOI."

Al-Safir quoted Dr. Mutlaq as saying, "According to all international, humanitarian, and legal standards, PMOI members are considered as political refugees. They have lived in Iraq as guests of the Iraqi people and have not interfered in Iraqi internal affairs. "

Secretariat of the National Council of Resistance of Iran-Paris
August 9, 2006