Maryam Rajavi: Europe must recognize the Iranian Resistance for democracy 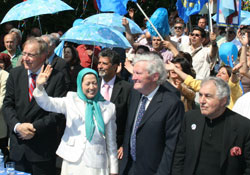 Maryam Rajavi: Europe must recognize the Iranian Resistance for democracy and popular sovereignty in Iran 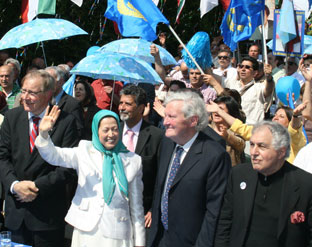 Maryam Rajavi: Europe must recognize the Iranian Resistance for democracy and popular sovereignty in Iran

NCRI – This morning, the British Court of Appeal, presided over by the Lord Chief Justice Phillips, refused the UK Home Secretary's leave to appeal the November 30, 2007 judgment of the Proscribed Organizations Appeal Commission (POAC). As such, the POAC ruling on the removal of the People's Mojahedin Organization of Iran from the terrorist list became definitive and cannot be appealed.

After a long examination of this case, POAC had determined that the PMOI was not concerned in terrorism and thus ordered the Home Secretary to lay a draft order before the Parliament to remove the PMOI from the list of proscribed organizations. POAC had described the decision to maintain the PMOI on the list "unlawful" and "perverse."

Mrs. Rajavi called on the British Government to abide by the Court's ruling and end the injustice and the violation of law. She urged the UK to immediately remove the PMOI from the terrorist list and lift all the consequent restrictions.

Underlining that the European Union's designation of the PMOI had been based on the decision of the UK's Home Secretary, Mrs. Rajavi said that following the ruling by the Court of Appeal, the Council of the European Union must remove the PMOI from the terrorist list at once. She added that any delay by the UK Government or the EU in doing so would amount to the violation of law and submitting to the demands of the religious fascism ruling Iran.

The Iranian Resistance's President-elect said that the terror label has inflicted enormous damage on the Iranian people and Resistance. Western governments have in effect contributed to the mullahs' suppression of the Iranian people, hamstrung the potentials of the Resistance and provided a pretext for the torture and execution of PMOI prisoners, she added.

The Iranian Resistance's President-elect emphasized that change in Iran by the Iranian people and the Resistance is the only option in confronting with the mullahs' threats to regional and global peace and security. She said European governments must recognize the Iranian Resistance, which is striving for the establishment of democracy and popular sovereignty in Iran.

Mrs. Rajavi described the 35 members of the British Houses of Commons and Lords, who challenged the PMOI's designation, as the aware conscience of the people of Britain for challenging this great injustice to the Iranian people and Resistance. She offered her gratitude to the appellants in this case and all lawmakers, jurists and lawyers who had fought long and hard to remove this proscription.

————————-
Editor’s note:The People’s Mojahedin Organization of Iran (or Mujahedeen-e-Khalq, MEK) is a member of the National Council of Resistance of Iran.