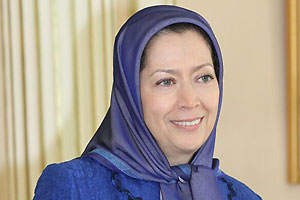 Arabic language Al-Jazeera website introduces Mrs. Maryam Rajavi as an “Iranian leader that has struggled against the two regimes of the Shah and Khomeini, and leads the People’s Mojahedin organization [PMOI/MEK]. The parliament-in-exile [National Council of Resistance of Iran (NCRI)] elected her as Iran’s President in 1993. She emphasizes that democracy and respect for freedoms must be established in Iran after the velayat-e faqih [clerical] rule.”

Maryam Rajavi says women are playing a significant role in overthrowing the velayat-e faqih regime, adding that more than half of the NCRI’s members are women, the report says.
“She summarizes in a number of articles her vision for Iran after the fall of the velayat-e faqih regime, including respect for freedom of choice, the legitimacy of the ballot-box and guaranteeing fundamental freedoms, abolition of the death penalty, separation of church and state, complete gender equality, an independent judicial system, freedom of expression, and a non-nuclear Iran.”

Iran: Resistance Units and Mek Supporters Commemorate Anniversary of Freedom of the Iran Resistance’s Leader From the Shah’s Prison