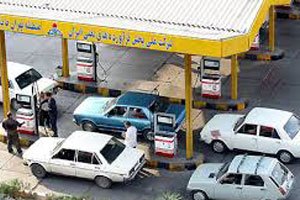 NCRI – The clerical regime ruling in Iran that has destroyed all Iranian people’s assets and country’s economic capacities, since this morning, increased the price of rationed gasoline by 75%, free-market gasoline by 50%, and diesel fuel by 66%. This anti-human measure will only ramp up inflation and prices and cause further poverty for the general population that according to the regime’s own declared standards are living under the poverty line.

Ramping up fuel prices as one of the most vital daily necessities of life, especially to this extent, vividly demonstrates that through ratcheting up pressure on the population, Mullah Rouhani is attempting to save the decadent regime of the mullahs. This is the other side of the coin of intensifying executions and oppression and the barbaric violation of human rights since this demagogic mullah assumed office.

The mindboggling increase in the fuel price on the pretext of providing aid baskets is while most of the country’s wealth, especially the oil revenues, is spent on the internal suppression, the anti-nationalistic project of attaining nuclear weapons, export of terrorism, warmongering abroad, and in particular the slaughter of the Syrian people and preventing the downfall of Bashar Assad, or is plundered by regime’s leaders and transferred to their foreign bank accounts.

The Iranian people have to take this price hike in fuel while just one of the foundations controlled by Khamenei has 95 billion dollars in assets (Reuters, November 11, 2013). All of the revenues of this huge empire are spent on suppression, massacre and terror unchecked. Most of the property of this foundation has been usurped from ordinary people using various pretexts.

According to Mohammad BagherNobakht, Rouhani government’s spokesman, 2.4 million people or around 3% of those receiving aid baskets, forwent receiving this aid package. Thus, 97% of the families registered to receive the aid baskets (Tasnim new agency, affiliated with the terrorist Qods Force – April 23) which in and by itself shows the extent of poverty and destruction of the middle class in the Iranian society. Meanwhile, EsmaeilJalili, parliament’s Planning and Budget Committee member, based on the registered forms, stated that the income of over 80% of the people is less than 600,000 tomans (Tasnim news agency – April 24). This is while the poverty line for a family is 1.8 million tomans. This means that the majority of the Iranian people have an income that is one third of the amount specified by the regime as the poverty line. The amount of aid basket for a family of four is 180,000 tomans which merely provides 10% of the least income above the poverty line.

Through increasing the fuel price, the clerical regime is taking money out of people’s pockets that is several fold that the amount it is giving the people in the aid basket. Therefore, doubtless, the fuel hike would aggravate the extent of poverty and unemployment.

As long as the anti-human and plunderer clerical regime is in power, poverty, inflation and unemployment would just worsen. Iran’s economy, destroyed during a 35-year period can only be revived and rebuilt after the downfall of this regime and the establishment of democracy and popular sovereignty.

Secretariat of the National Council of Resistance of Iran
April 25, 2014