More than 70,000 Iranians demanded the removal of the PMOI (MEK) from terror list

More than 70,000 Iranians from the United States and Europe Gathering in Northern Paris Demanded the Removal of the PMOI from the Terror Lists

NCRI – On Saturday, June 28, more than 70 thousand Iranians gathered to pledge their support for the Iranian Resistance and its President-elect, Mrs. Maryam Rajavi, in the Paris-Nord Exhibition Hall. 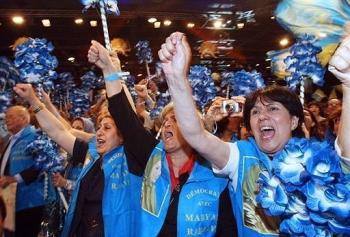 More than 70,000 Iranians from the United States and Europe Gathering in Northern Paris Demanded the Removal of the PMOI from the Terror Lists

NCRI – On Saturday, June 28, more than 70 thousand Iranians gathered to pledge their support for the Iranian Resistance and its President-elect, Mrs. Maryam Rajavi, in the Paris-Nord Exhibition Hall.

During her 90-minute speech, the crowd interrupted Mrs. Rajavi dozens of times with loud cheers and standing ovations. In her speech, Mrs. Maryam Rajavi said, "The mullahs are in the phase of being overthrown. They lack political and religious legitimacy. The Iranian people's rage has surrounded them. Today, they rely on an insignificant minority, essentially gathered in the Islamic Revolutionary Guard Corps (IRGC), the Bassij Force and the infamous Intelligence Ministry. All of this barely constitutes three percent of Iranian society in its entirety."

The gathering incorporated representatives from the Iranian exile community residing in various countries in Europe, the United States and Canada. They all pledged their support to the People's Mojahedin Organization of Iran (PMOI) and its members residing in Ashraf City in Iraq, as the backbone of the Iranian Resistance against the mullahs' regime. They called on the European Union and the United States to remove the unjust terrorist label from the PMOI immediately.

Nearly 1,000 parliamentarians and distinguished political, religious and cultural personalities as well as law experts from European countries, the United States, Canada, and Arab countries such as Iraq, Lebanon, Jordan, Egypt, Morocco, Tunisia and Algeria participated in the gathering.

Mrs. Rajavi said in her speech, "The unjust terror label against the PMOI brought with it much calamity for us, our nation, the people of Iraq and the Middle East. Not the least of which were pictured by the cranes, from which Iranians were hanged in Iranian cities, and the onslaught of terrorism and bloodshed in Lebanon, Palestine and Afghanistan." She added that by accusing the PMOI of terrorism, Western governments have offered the greatest help to the biggest state sponsor of terrorism in the world. Hence, removing the PMOI from the list will not only open the way to a democratic change in Iran, but it would also bring an end to a devastating and erroneous policy vis-à-vis the Iranian regime and the expansion of terrorism and fundamentalism in the world.

"The Iranian Resistance has never called on the US or any other country to send their sons and daughters to fight a war with the mullahs. We are demanding the removal of the terrorist label from the Iranian Resistance, which has lost 120,000 people to the mullahs' suppression. Do not deprive the world from the most effective means to combat the religious fascism and terrorism. Instead, side with those who can bring the Iranian people freedom."

The President-elect of the Iranian Resistance continued her speech by referring to "The declaration by three million Iraqi Shiites reiterating that 'the PMOI is a bulwark against the mullahs' meddling in Iraq and has stood by the Iraqi people'." This shocked the mullahs' regime, which tries to act as if it represents the Shiites, she added. The Iraqis said in their declaration that the PMOI is also preventing the increase of terrorism and fundamentalism.

As regards to the nuclear dossier, Mrs. Rajavi stated, Western governments have done nothing but waste the international community's time and buy more time for the mullahs instead. Indeed, four years of negotiations, two years of policy of incentives and six years of seriatim retreat in all. In addition, during all these years the same governments gave in to the mullahs' demand of suppressing the PMOI as their first priority.

Nevertheless, at no point in time has the Iranian society been broiling with protests as it is today, Mrs. Rajavi added. During the past three years, there have been 4,700 acts of protest on average.

Mrs. Rajavi continued, "The future Iran we are fighting for will be a society in which all Iranian citizens enjoy freedom of speech, belief, religion, clothing, and free access to information. Everyone will be equal before the law."

A delegation of British lawmakers comprised of 15 members of both Houses of Parliament, including Lord Waddington, former Home Secretary, Lord Corbett and Baroness Gould expressed solidarity with the Iranian Resistance and its President-elect and congratulated the removal of the PMOI from the terrorist list in Britain. They reiterated that in their belief, the only solution to the Iranian problem is a democratic change by the people and the opposition as proposed by Mrs. Rajavi.

A delegation of 20 European Members of Parliament led by Dr. Alejo Vidal-Quadras, Vice-president of the European Parliament, highlighted their commitment to support the PMOI and the National Council of Resistance of Iran as well as working to remove the PMOI from the EU terror list.

A fifty member delegation from Iraq comprised of leaders of political parties and heads of tribes expressed their support for the residents of Ashraf City. The Iraqi dignitaries made it clear that they consider the POMI members as members of their own family and will not allow the mullahs' agents to harm them in anyway. Referring to the declaration by 5.2 million Iraqi citizens in June 2006, and that of 3 million Iraqi Shiites in June 2008, the Iraqi delegations reiterated, "Shiites, Sunnis, Christians, Kurds, Arabs and Turkmens in Iraq unanimously support the PMOI and believe that no one but the Iranian regime's agents are attempting to harm them."

Another delegation comprised of 12 parliamentarians and distinguished personalities came from Jordan.  They joined other delegations in offering unequivocal support for the Iranian Resistance, saying, "We believe in the PMOI as the antidote of the Islamic fundamentalism in the region and in Iran."

Secretariat of the National Council of Resistance of Iran
June 28, 2008