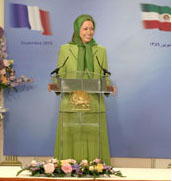 Victory of  Francois Hollande is victory of human rights and democracy

NCRI – Mrs. Maryam Rajavi, President-elect of the Iranian resistance congratulates brilliant victory of Mr Francois Hollande on behalf of the Iranian people and resistance citing it as “Spring of Change in France”. She emphasized that the French people started a new phase  in their  history  with this merited choice. victory of  Francois Hollande is the victory of  French values, victory of human rights, democracy and revival of  France as the cradle of  human rights.

She stated: French people showed their wisdom in this historical choice illustrating their faith in principles, their ethics in politics, their refusal of discrimination and chauvinism, their concern for justice over everything else, as well as their desire for victory of human values and “instant change”.

Mrs Rajavi added: “The victory goes beyond French boarders and the mullahs who are cruelly ruling Iran are the foremost looser”.

She finally stated: “Iranian resistance, like other freedom-loving people  would very much like to see France retrieves its position in the world to become an advocate of the worldwide values for all nations who are suffering. Time has come for this now”.

Secretariat of the National Council of Resistance of Iran
May 6, 2012