Rajavi: Only solution for Iran is democratic change with Iranian people and Resistance 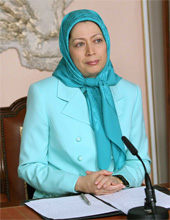 Following yesterday’s remarks by Mahmoud Ahmadinejad, the Iranian regime’s President, and on the eve of the meeting of EU, US, Russia and China in London, Mrs. Maryam Rajavi, President-elect of the National Council of Resistance of Iran,  dismissed Ahmadinejad’s remarks and said: The demagogic and warmongering statements by the president of the regressive regime ruling Iran, shows once again that as the Iranian Resistance declared last summer, [Ali] Khamenei, Supreme Leader of the regime, has with the appointment of Ahmadinejad, declared war on the world community in pursuit of nuclear weapons, export of terrorism and fundamentalism, and in particular interference in Iraq.

Mrs. Rajavi emphasized that faced with growing domestic opposition and revulsion for its policies, the clerical regime in Tehran feels the need to export terrorism and fundamentalism, and in particular aims to dominate Iraq, more than ever before. The regime considers this to be its only option for survival. This is why it is at odds with democracy and stability in Iraq and peace in the Middle East and works earnestly to undermine the two processes. The clerics ruling Iran view domination of Iraq to be the single most important step toward realizing their ominous dream of Islamic world rule. Their intent in acquiring nuclear weapons is to tip the current balance of power and pave the way for their export of Islamic fundamentalism and terrorism in order to save their disgraceful rule from its inevitable demise.

The President-elect of the Iranian Resistance emphasized that the solution to the problem Iran poses for world peace and tranquillity under the rule of the mullahs is precisely democratic change. Change cannot be achieved through appeasement with the religious dictatorship in Iran or with a foreign war. It is the Iranian people and their organized resistance movement, who have struggled for freedom and representative government, who hold the keys to such change. The appeasement policy of the last two decades and the terror designation and limitations placed upon the People’s Mojahedin Organization of Iran (PMOI), the main opposition force of the Iranian Resistance, has been the biggest obstacle to change in Iran. Such a policy has damaged the Iranian people’s efforts for change tremendously.

Mrs. Rajavi added that appeasement must be abandoned completely to head off tragedy and inevitable war, the unjust terror designation of the PMOI must be rescinded, and the religious fascism ruling Iran must be expelled from the international community.

Secretariat of the National Council of Resistance of Iran
January 15, 2006