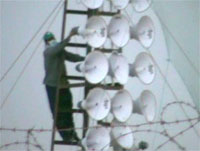 According to reliable reports received from inside the Iran’s Revolutionary Guards (IRGC), the religious fascism ruling Iran, in cooperation with the Government of Iraq, intends to station mullahs’ Qods Force and intelligence agents who have been stationed around Ashraf since three years ago and engaged in psychological torture of the residents to Liberty’s proximity and to transfer loudspeakers which were used for their psychological torture to Liberty. Under the guise of residents’ families, intelligence agents have been engaged in psychological torture of Ashraf residents round the clock for about two years with 320 loudspeakers. Presently on the order of the Iranian regime’s embassy in Baghdad loudspeakers have been removed from Ashraf and have been transferred to the agents’ residential trailer at Ashraf entrance.
According to reports, mullahs’ intelligence intends to continue dispatching agents to Ashraf as long as PMOI members are present there. At the same time it plans to provide required facilities for stationing them close to Liberty. The Iranian regime’s embassy in Baghdad has set up 6 trailers in one of the bystreets adjacent to Liberty. Based on the plans, this location would be ready by November and the regime’s agents will be stationed there afterward.
The embassy plan is to transfer agents from Iran to Iraq and stay in a hotel in Baghdad. From there, they would go daily to these trailers in order to go to Liberty’s entrance with the company and protection of Iraqi forces.
The Iranian regime has negotiated with the Iraqi government and the International Committee of Red Cross to obtain necessary permits and facilitate agents’ entry to Iraq.
According to obtained reports from within the regime, the Iraqi Prime Ministry has sent a letter to the Iranian Embassy in Baghdad notifying them that Sorayya Abdollahi, known intelligence agent, can take over the agents’ connex in Liberty as “families’ representatives”. She has been one the organizers of psychological torture of Ashraf residents in past three years and has been repeatedly exposed by the Iranian resistance.
The presence of these agents around Liberty shows that the Iraqi government continues to advance the inhuman and suppressive demands of the mullahs’ regime against Iranian dissidents. They are under the protection of Fourth Geneva Convention and based on the statements of the United Nations High Commissioner for Refugees are formal asylum seekers and “persons of concern”. The continuation of these suppressive measures and psychological torture of residents not only violates international humanitarian and human rights laws, but it is a clear violation of the Memorandum of Understanding signed between the Government of Iraq and the United Nations, and the terms of the Special Representative of the Secretary General’s letters to the residents including the letter of December 28, 2011.
According to the opinion of the most prominent international jurists, the United Nations is judicially required to guarantee the protection of Ashraf residents and if this requirement is not met because of the UN negligence or failure to act, the UN has judicial responsibility.
The Iranian Resistance urges the U.S. government and the United Nations, in accordance with their duties and obligations, to prevent such a criminal law-breaking measure and not to allow the presence of the terrorist Qods Force and intelligence agents around Liberty

Secretariat of the National Council of Resistance of Iran
October 16, 2012