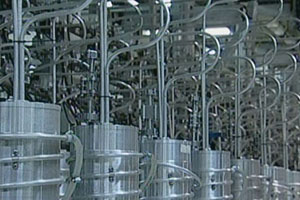 NCRI – The clerical regime’s Supreme Leader, Ali Khamenei, during a speech on Wednesday, revealed the intentions of the religious dictatorship ruling Iran to continue nuclear projects and to dodge the signing of an agreement curbing his regime’s nuclear activities.

On the same day the clerical regime’s President, Hassan Rouhani, stressed that nuclear negotiations would not stop the regime’s nuclear project advancement.

In his speech Khamenei said: “I believe even if we accept in the nuclear issue what they are dictating, the sanctions will still not be removed because they oppose the revolution itself.”

He said: “We can stand against the enemies’ fanfare in the sanctions. If sanctions are to stay, it is the Iranian nation that will sanction them in an appropriate time in the future. The largest share of gas in the world belongs to the Iranian nation and Europe needs this gas.”

Ali Khamenei is deeply worried that, by setting aside the nuclear projects, the position of the Supreme Leader within the regime is weakened and the totality of the regime is poised to collapse. Khamenei is trying to dodge the signing of an agreement as much as he can by using the appeasement and the weak policy of the European countries.

The same day, Hassan Rouhani said in another speech: “Due to the noisy nature of the nuclear negotiations, these [nuclear] activities and progress have been overshadowed to some extent … we do not and will not get permission from anyone to advance in science and knowledge. Nobody should think that because we are in negotiations and engagement with the world we want to abandon the scientific advancement.”

It has to be noted that a decade ago Rouhani admitted that the regime, by accepting a temporary agreement, found the opportunity to strongly expand its nuclear projects and increase its centrifuges.

Furthermore, Ali Khamenei, by repeating the claim that the US is providing military aid to ISIS, revealed his intention to intensify terrorist and fundamentalist meddling in the region. He claimed that ‘Basiji students’ have sent him a message asking why the regime is not using them to promote revolution in the region?

Secretariat of the National Council of Resistance of Iran
February 19, 2015