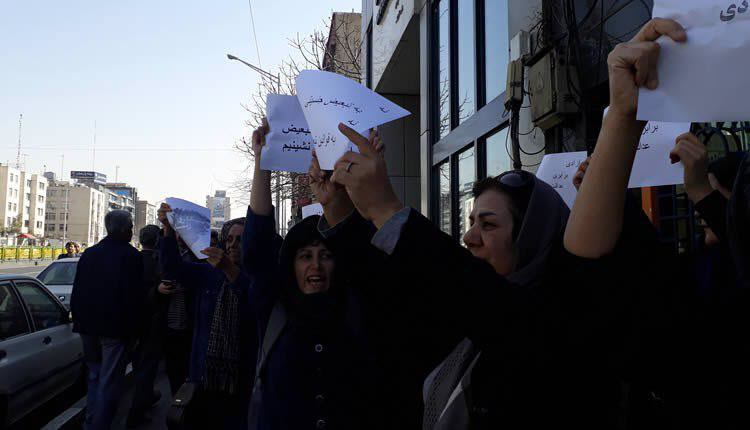 Urgent call for immediate freedom of those arrested

Thursday, March 8, 2018, on the International Women’s Day, a group of courageous Iranian women gathered outside the Labor Ministry on Tehran’s Azadi Ave.

The women held placards which read, “No to gender-based discrimination”, “no to discriminatory labor law”, “equal and fair wages for women”, “Freedom, equality, justice.”

Security forces, plainclothes agents and female troops had been stationed in the area, on alert before the gathering started. To prevent the formation of the gathering and disperse the crowd, they viciously attacked the participants and brutalized them with batons and shockers. At least 20 women were arrested.

Security forces did not allow anyone to take pictures or shoot films of this gathering. A number of young men who had come to support the IWD gathering were also arrested and taken to SSF Station 137 on Gisha Ave.

The Iranian Resistance calls on international organizations defending human and women’s rights to vehemently condemn the raid on women and take urgent action to free those arrested. The NCRI calls on Iran’s courageous youths to rise up against this misogynous regime and its repression of our fellow countrywomen.

The Secretariat of the National Council of Resistance of Iran
March 8, 2018

Previous articleMaryam Rajavi: The Arisen and Combatant Women of Iran Are the Pivotal Force for Change
Next articleInternational Women’s Day 2018 – Belgian Parliament