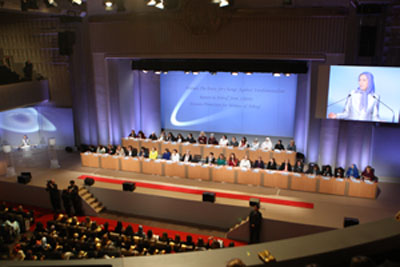 Paris: International Conference on Women’s Day
•    Call for participation in the international women’s front against fundamentalism
•    Conference praises the role of Mrs. Maryam Rajavi in leading the movement of equality and pays tribute to 1,000 Ashrafi women
•    Call for returning Liberty residents to Ashraf and appointing an impartial envoy by the UN to replace Martin Kobler, Special Representative of the U.N. Secretary-General for Iraq

Maryam Rajavi:
•    Iranian regime seeks another massacre in Liberty. The United States and United Nations are directly responsible regarding the residents
•    With a completely reactionary ideology, the mullahs’ regime has sought to relieve itself of the dead-end inside Iran by exporting fundamentalism and terrorism to regional countries

On Saturday, March 9 , at an international conference in Paris marking International Women’s Day, with the participation of political, social and cultural women dignitaries along with human rights and women’s rights activists, Iranian Resistance warned that based on reliable information the mullahs’ regime is planning another missile and mortar attack and massacre against Liberty residents with the support of forces under the command of Iraqi Prime Minister Nouri Maliki. The missile attack on Camp Liberty on February 9th which left 7 killed and more than 100 wounded and harmed was carried out upon Khamenei’s order in coordination with the Government of Iraq.

political, social and cultural women dignitaries, along with women’s rights activists from 40 countries including all over Europe, most of the Islamic countries (including Egypt, Tunisia, Syria, Saudi Arabia, Yemen, Afghanistan, Jordan, Palestine, Mauritania, Morocco, Algeria, Iraq), the US and Canada took part in this conference.

Maryam Rajavi’s remarks at the conference 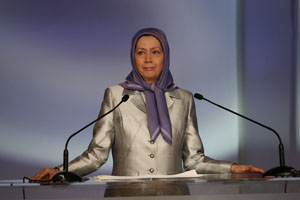 Ashraf residents are facing a humane catastrophe in Liberty Prison

Mrs. Maryam Rajavi, President-elect of the Iranian Resistance, said in her speech, “Over 3,000 Ashraf residents after a mandatory relocation are once again facing the threat of a humane catastrophe in Liberty Prison.

“The United Nations, and especially the Special Representative of the Secretary-General, despite their catastrophic irresponsible approach towards the February 9th massacre, continue to take the side of the mullah’s puppet government in Iraq. This is while currently the issue of Liberty residents’ security has remained unattended to and they have taken no action so far.”

Mrs. Rajavi called women’s rights and human rights advocates to urge UN, the U.S. government and the UN Security Council to fulfill their duties and to establish an inquiry commission immediately so that those whose hands are tainted with blood would be exposed, and the UN Secretary General  would appoint an impartial envoy, and return the resident to Ashraf  to ensure their security or transfer all of them to the U.S. from where their transfer to other countries would be possible.” She underscored:

“Today, defending 1,000 vanguard women in Ashraf and Liberty has become a vital duty for all equality movements. Women who hundreds of them have spent years in the dungeons of the mullahs’ regime, and are invaluable treasures in the vanguard women’s movement on the subject of equality.”

While expressing gratitude for the unique and historical role of Mrs. Rajavi in leading the movement for equality and the creation of novel values in the struggle against fundamentalism and misogyny, the conference praised one thousand Ashrafi women who in the past ten years have managed and led an exceptional resistance.

The conference condemned the criminal attack of February 9 against Camp Liberty and called on the international community to immediately return Camp Liberty residents to Ashraf. It also called on the UN Secretary-General to discharge his Special Representative Martin Kobler who is guilty in the February 9 massacre and to designate an impartial and competent envoy in his place.

Speakers called on the UN Secretary-General Ban Ki-moon, the U.S. President Barack Obama, and other members of the Security Council stressing that any delay in relocation of Liberty residents to Ashraf where they enjoy better security may lead to a humanitarian catastrophe.

The speakers reiterated the Middle East and northern Africa are at a very sensitive epoch and while recent years have been witness to unprecedented developments in this part of the world, maturation of Islamic fundamentalism with its misogynic distinction has seriously threatened the democratic movement in the region. They emphasized that the experience of the Iranian Resistance in the past three decades in confronting the theocracy ruling Iran is a good example on how the active involvement of women in political and social struggle and their participation in political leadership is inevitably the requisite in confronting Islamic fundamentalism.

Mrs. Rajavi also praised in her speech the resistance of courageous Iranian women and girls, especially the resistance of women political prisoners in prisons of the misogynic regime of Velayat-e faqih, and hailed the resolute women in Syria, Iraq, Palestine, Egypt and other parts of the world who struggle for freedom and equality, and called all women around the world to play their historic role in a widespread and united front against fundamentalism.

Previous articleIndia set to halt Iran oil imports over insurance
Next articleLiberty residents must be moved or face another deadly attack, an International Women’s Day conference is warned