In alliance with ISIS, mullahs attempt to save Assad by blaming West for Paris massacre 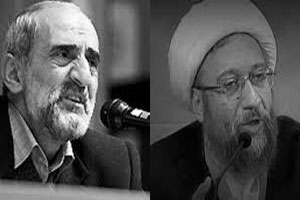 • Sadeq Larijani: US, Europe must be blamed for formation of Daesh and Kerry must be prosecuted for this crime

• Pro-Khamenei newspaper editorial: France is allied with US in Syria. Paris is just the beginning. French people must question their officials

In hundreds of articles, interviews and remarks on the November 13th massacre in Paris, officials of the religious fascism and the state media in Iran rejoice at this anti-human crime and blame the governments of France, US, etc. for it, an atrocious approach conceivable only of the criminal mullahs with 120,000 political executions on their record.

The mullahs openly threaten Western countries with more terrorist acts and say if they do not wish recurrence of such crimes, they should collaborate with the clerical regime by subduing the Syrian opposition, to thereby save Bashar Assad after murdering 350,000 innocent people and driving half of the country’s populace out of their homeland.

The mullahs thus desperately seek to take advantage of the anti-human crime in Paris to accomplish what the IRGC, Hezbollah, Iraqi mercenary militias and Afghan hirelings failed to do. Something that very well discloses the alliance and common interests of the clerical regime, Bashar Assad and ISIS.

Referring to the Paris massacre, Mullah Larijani, the clerical regime’s chief justice, on November 16 said: “Those who supported and facilitated the entry of terrorists to Iraq and Syria, today face the consequences… The main question is who created these people (ISIS)? The Americans and Europeans are responsible for this.”

Addressing the US Foreign Secretary, Sadeq Larijani said, “You must be put on trial for this crime. You were involved in the creation of ISIS. This is a warning to Western countries: If you want to prevent export of terrorism to Europe, you must not support it.”

As if they were prepared in advance, within a few hours after the attacks in Paris, the daily newspaper Kayhan which reflects the views of the mullahs’ supreme leader Ali Khamenei published an article entitled, “Rabid dog bit his master’s leg”. According to the article, Khamenei had already predicted on June 22, 2014, that such groups would make trouble in not a distant future for the countries who supported them. The article wrote, “France is one of the close allies of the United States in Syria… If they seek to avenge, they must question their officials before anything else.”

On November 14, the morning after the attacks, Hossein Shariatmadari, Khamenei’s representative in Kayhan, wrote in the paper’s editorial, “(The Paris massacre) is the beginning of the era that Khamenei had predicted” and warned that “the countries that support Takfiri terrorists, will reap storm from the wind they implanted.”

Khamenei’s representative added, “Paris is just the beginning. The governments of US, Europe and some of the Muslim-killing, wanton leaders in the region like Saudi (Arabia), Qatar, etc. have good reason to declare a state of emergency and even martial law… The ISIS is made up of a bunch of silly, ignorant people raised by Zionists and the murderous statesmen of US, UK and France and fostered by the Saudis who kill their guests. They will commit their crimes wherever it is possible to launch an attack.”

As a face-saving measure, Shariatmadari suffices to a brief description of the Paris attack as “shameless and evil”, but immediately adds, “(The people of France) are paying the price of the crimes of their statesmen who brought up the terrorists.”

On November 16, the IRGC news agency, Fars, dubbed opposition to Syria’s dictator as “France’s strategic mistake” and wrote: “Paris’s contacts and communication with Takfiri terrorist groups and even some strata of ISIS, and more importantly, its multi-faceted communications with Arab supporters of these groups made Elysee confident” but “the Takfiris’ heavy defeats in recent weeks in Syria and Iraq” caused ISIS to attack “yesterday’s backer of terrorists and opponent of Bashar Assad government.”

Furious at the setbacks the clerical regime has experienced in conspiring against the Iranian Resistance in France on June 17, 2003, and in subsequent years which ended with dozens of judicial verdicts in favor of the PMOI, the IRGC news agency wrote, “On the one hand, France claims to be combatting terrorism but on the other, it hosts notorious, terrorist groups like the People’s Mojahedin and some Takfiri elements, and openly supports groups like the Nosrat Front at the same time.”

In yet another inhumane and appalling approach, the state-run daily, Vatan-e Emrouz, addressed the government of France on November 16 and wrote, “(The Paris attacks) were your own cuisine! This is a stew that you have been cooking for years! This is the same bloody tablecloth you have spread in Iraq and Syria and now it has been spread for a few hours in Paris… Mr. Hollande, please help yourself! Take a look at the corpses of your compatriots!”

There words cannot be uttered by anyone but torturers and butchers who routinely torture, kill and execute innocent people; those who cannot stop this cycle of deaths otherwise they will be ousted.

Of course, the author of this article very accurately details his own and his regime’s profile when he writes, “We are the ones who stood by Assad since day one of the Syrian crisis. The Medal of Honor for fighting the terrorism of ISIS only suits the chests of the Hezbollah… The world is indebted to the Islamic Republic and its children who stood up to these Western brats all by themselves!”

The Javan daily associated with the IRGC also revealed the mullahs’ true nature immediately after the Paris massacre on November 17 and wrote the main problem is that “Paris continues to persist on the ouster of Assad and is not willing to accept even a transitional period.”

Secretariat of the National Council of Resistance of Iran
November 17, 2015