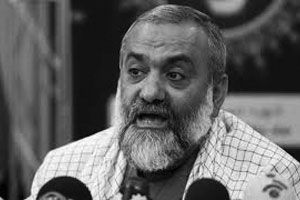 Naghdi: Annulment of sanctions on Sepah Bank and release of $1.7 billion was in return for releasing U.S. spies

In a speech in Tehran, IRGC Brigadier General Mohammadreza Naghdi, Commander of the suppressive Basij force, described hostage-taking and blackmail as “the way to get our right from the arrogant”. He referred to the arrest of U.S. citizens and the detention of U.S. boats in the Persian Gulf as examples.

Naghdi has personally commanded the attack on the British embassy in November 2011 and the attack on the Saudi embassy in January of this year by the orders from Khamenei. In his speech he said: “The annulment of sanctions of Sepah Bank and getting back $1.7 billion of blocked Iranian assets after 36 years had nothing to do with the negotiations and was simply the price paid by the U.S. to get its spies freed” and this goes to “show that the language of force is the only language U.S. understands… the way to get our right from the arrogant is to become strong and we need to become stronger and stronger every day” (Fars News Agency, affiliated with IRGC – January 20, 2016). This criminal IRGC element added, “5-6 revolutionary guards arrest 10 transgressing U.S. marines in the Persian Gulf and with God’s benevolence enemy’s plans were folded.”

Taking hostage foreign nationals, especially the U.S. nationals in Iran or Lebanon — and in recent years in Iraq by paid militias — is a well-known policy of the religious fascism ruling Iran and a crucial lever of its foreign policy. The appeasement by the West, especially the United States, and unjustified concessions to the mullahs has emboldened them in continuing with and escalating the employment of this anti-human scheme.

Secretariat of the National Council of Resistance of Iran
January 21,2016